Robert A. Heinlein’s award-winning SciFi-novel “The Moon is a Harsh Mistress” depicts a mutiny at a Lunar penal colony. It envisions that sending criminals and politically unwanted individuals “up there” is not an issue, and that the Moon would be a feasible place where the “civilization” sends their unwanted masses, along the lines of Australia between 1788 and 1868.

In practice, at least with our current technology, sending 100 kg lumps of humans to the Moon is so costly that it is very unlikely that a penal colony of that kind would ever be even suggested even by the most scientifically-ignorant politicians.

Not only is getting off the Earth’s gravity well hard, but also reducing speed from orbital to soft landing on the Moon needs perfect precision. The Moon has no atmosphere, so the speed reduction from kilometers per second to zero must be done entirely with thrusters. And at the final moment, the surface of the Moon is speckled with craters of myriad of sizes, preserved over a millennia due to the missing forces of erosion: if you make a poor choice for the landing site, the craft is in danger of toppling over.

Although the first (relatively) soft landing on the Moon was done already in 1966, which also was the actual year of the publication of Heinlein’s novel, it was not a slam-dunk: prior to Luna 9, both the Soviet Union and the USA had tried to achieve this feat already numerous times.

As for the “relative softness”, Luna 9 used airbags, effectively colliding with the ground at a final speed of several tens of kilometers per hour, thereafter bouncing multiple times. So it was “soft” only in terms of not destroying the landing craft in the process.

During the same year, the very first truly soft landing with thrusters was performed by the American Surveyor 1, thereafter rapidly leading to the amazing success story of Apollo missions, for which the final moments of landing were naturally helped by having a non-artificial intelligence of an astronaut doing the final decisions over the location for a touchdown.

But from 1972 onwards, no Lunar landings were performed until 2013, when China joined the exclusive club of countries that have completed this feat.

China’s repeated landings made this unarguably complex maneuvre look easy, as I implied in my earlier blog entry, but this year has proved that success in this particular area of space exploration is still far from being a done deal:

First, in April, the Israeli Lunar lander Beresheet’s main thruster shut down for a short period of time during the landing phase, and its re-ignition came too late to stop the lander from hitting the surface with an estimated speed of 500 km/h.

And this month, the Vikram lander of the India’s Chandrayaan-2 Lunar mission apparently toppled over after a harder-than-intended landing, and the resulting position of its antennas made it impossible to communicate with the orbiter, even if it would have otherwise survived the impact.

In the Israeli case, the main culprit appears to have been a failed gyroscope, combined with a brief loss of communications between the mission control and the spacecraft. Therefore, although the gyroscope was eventually reset and the main thruster got re-ignited, the spacecraft was already too close to the surface of the Moon.

As for the Chandrayaan-2, the lander had started to deviate from its designated landing path at the altitude of about two kilometers, and the reason for this is still unknown. But in order to cut costs, the final phase of landing was never entirely tested on Earth, so there may have been some inherent design issue that caused the failure. The lander has been spotted by the orbiter's cameras, residing on its side, about 500 meters from the intended landing site.

Whereas the Israeli spacecraft was merely a test bed for future operations and a showcase of technical excellence, eventually leaving only one more retroreflector at the surface of the Moon, the Indian probe had much higher goals: it was supposed to use its Pragyan rover to study an area near to the Moon’s South Pole, seeking for traces of hydroxyl and water ice in locations that are never lit by the Sun.

All is not lost, however: the orbiter is still fully functional and can keep on studying the polar areas with its spectrometers, radars, mass analyzers and cameras. Orbiter's hi-resolution camera, with its 30 cm per pixel resolution, is the most precise camera ever orbiting the Moon. Hence, despite the failure of the lander, Chandrayaan-2 can be counted as a major success for India’s home-grown space exploration, and ISRO estimates that over 90% of the original scientific goals will be met.

Beresheet did also make history: it was the first fully privately initiated Lunar mission, driven by a non-profit SpaceIL and a well-known Israeli aerospace company IAI.

Heinlein's “The Moon is a Harsh Mistress” also explored ideas like conscious Artificial Intelligence and alternate forms of societies that would form in a resource-poor, space-limited situation like living on the Moon. Heinlein may have been overly optimistic on the logistics of getting people to the Moon, but in 1966, it was common to expect to take holidays on the Moon within 50 years, so overshooting in this particular area should be easy to forgive. 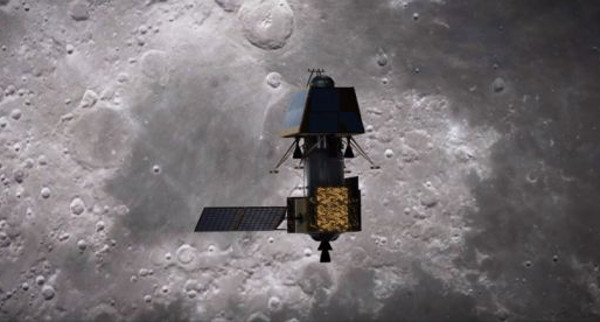 An artist's depiction of Chandrayaan-2 orbiter and lander [ISRO]