You proofread and you proofread and your friends proofread, umpteen times. Still you miss a word here, a comma there, a typo here and there. It is amazing what can escape your gaze. Then you do a last minute addition and another thing slips through.

The best proofread by far was making the Finnish translation: when you have to take your text one sentence at a time and turn it into a meaningful sentence in another language, you really need to read through it. Unfortunately at this point the original English version was already in print. Special mention must also be given to Miles Jiang, who found several errors and misprints during his translation effort for the Chinese edition.

Here are some of the most noteworthy issues found. My apologies for not catching them sooner.

Page 29: Omitted mentioning Hedy Lamarr in the discussion about frequency hopping. Fixed in this blog entry.

Page 31: Iva Toguri D'Aquino was sentenced for ten years, but released after serving six years and two months of her sentence.

Page 33: Fessenden worked at the Western University of Pennsylvania.

Page 76: I cut corners and did not get into details of Sidereal Day. The orbit time for a geostationary orbit is actually 23 hours, 56 minutes and 4.0905 seconds, but why this is different from the "expected" 24-hour day would break the flow of the base story. My apologies to the more scientifically-minded readers. More info in this blog entry.

Page 100: The most embarrassing of them all, for a Finn: misspelled "Linus Torvalds" due to a last minute change. For someone who's actively been using Linux for almost two decades, this was bad. I'm sorry.

Chapter "Home Sweet Home": Not an error per se, the world just took a different turn while the book printing process was still going on. Details in this blog entry.

Page 178: The reference to VLF regarding submarine communications should refer to ELF instead.

Page 184: The latest UTF-8 standard allocates up to four bytes per character, not five.

Great thanks again to everyone who has flagged these errors to me. Please send me your findings, contact info at the bottom of the page. 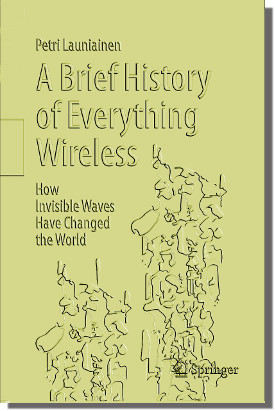