From the back cover:

Since the discovery of electromagnetic waves less than 150 years ago, the application of wireless communications technology has not only revolutionized our daily lives, but also fundamentally changed the course of world history.

A Brief History of Everything Wireless charts the fascinating story of wireless communications. The book leads the reader on an intriguing journey of personal triumphs and stinging defeats, relating the prominent events, individuals and companies involved in each progressive leap in technology, with a particular focus on the phenomenal impact of each new invention on society.

Beginning at the early days of spark-gap transmitters, this tale touches on the emergence of radio and television broadcasting, as well as radio navigation and radar, before moving on to the rise of satellite, near-field and light-based communications. Finally, the development of wireless home networks and the explosive growth of modern cellular technologies are revealed, complete with a captivating account of their corresponding company histories and behind-the-scenes battles over standards.

For those wishing to peek behind the magic curtain of friendly user interfaces and clever engineering, and delve further into various processes underlying the ubiquitous technology we depend upon yet take for granted, the book also contains special “TechTalk” chapters that explain the theoretical basics in an intuitive way.

Petri Launiainen has more than twenty years of experience in wireless technologies, having served as a Vice President at Nokia, and as a Chief Technology Officer at Nokia's Brazilian research laboratory, INDT. 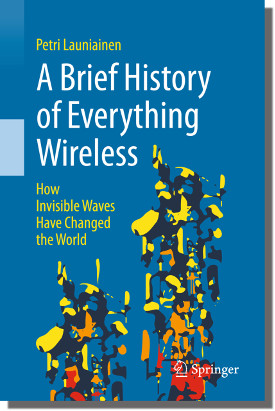