In my earlier blog I described the earliest attempts to provide an airborne radio transmitter setup. The advantage of such a system is that you can reach further along the curvature of the Earth’s surface than what is possible by using a conventional radio transmitter on ground.

But the limitation for systems like these comes from the fact that even the planes with the longest endurance run out of kerosene in about 24 hours, requiring a costly and dangerous air-to-air refueling, or a replacement plane to arrive to take its place. Conventional airplane engines are also not made for long endurance use without intermittent maintenance.

But with the latest advances in the areas of solar panels, ultra-light materials and electric motors, a completely new class of airplanes is about to step in service: one of the most advanced creations of this new type is Odysseus, which is a product of a company called Aurora Flight Sciences.

This is a startup that was acquired by Boeing in 2017.

Odysseus is a sleek, autonomous solar-powered airplane that can keep on flying in stratosphere for months on end. It is capable of lifting a payload of 25 kg that can be supplied by 250 watts of continuous power.

These numbers may look small, but for many data communications purposes they are more than adequate. Therefore, creating a “flying hotspot” over a city, or a relay station that spans over a hop of up to 800 km, becomes a possibility.

With an unmanned aerial vehicle (UAV) like Odysseus, deploying a temporary communications network over an area that has experienced a major natural disaster would be an easy task.

The cost of these kind of solutions is only a fraction of what would be needed when using a conventional satellite communications approach, and as the offered functionality overlaps many of the traditional satellite capabilities, the term high-altitude pseudo-satellites (HAPS) has been coined for these novel systems.

Such airplanes can also be used for long-term atmospheric research and high-resolution imagery, the latter of which could be used to provide an “eye in the sky” watching over illegal logging over Amazon rainforest, or climate change effects on the Greenland ice sheet: locations that have been in the news lately, and neither in a positive way.

Systems like Odysseus are yet another beautiful example of joining together location-based technologies, material sciences and ever-increasing computing capacity, creating fresh editions of decades-old ideas. 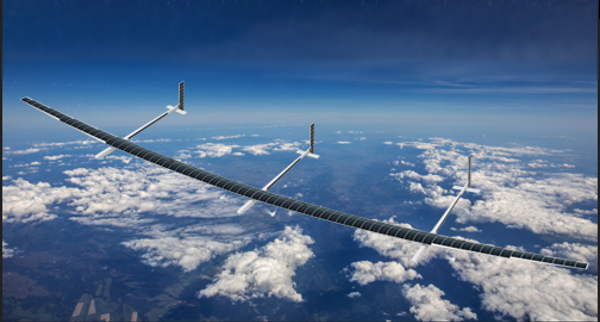