During my walk to work two weeks ago I witnessed the infamous “Sun Ray Phenomenon”, a situation in which the rays of the Sun that were filtered down through the holes in the cloud cover appear to converge at a not-so-distant point.

I snapped the adjoining picture of what I saw in that morning.

As the Sun is supposed to be roughly 150 million kilometers away and massive when compared to the Earth, the streams of photons that eventually hit the Earth are by all means and purposes parallel. Therefore, at first glance, these converging rays appear to dispute the “scientific” distance of the Sun.

The Flat Earthers are happily claiming that the Sun is actually just some 5,000 km above us: a claim that can be easily disproven by the examples listed in my book. But as is the norm, individual, seemingly logical phenomena like these converging Sun rays are often used as an “undisputed proof” of the Flat Earth.

So let's investigate the physical realities around the image I snapped on that day:

It just so happens that the rays that I saw were spot on over the Barcelona International Airport. So I dialed in the current weather information that was repeatedly transmitted to the seemingly endless stream of planes approaching the airport: it stated that the cloud cover started from an altitude of 3,000 feet.

Hence, if we draw the continuation lines for the converging rays over the picture, we can easily see that they would meet somewhere around an altitude that is over 6,000 feet, but below 9,000 feet.

This puts the source of light at an altitude of about 2,5 km. Therefore, the United Airlines flight from Washington to Barcelona that was approaching the airport at an altitude of 7,500 feet at that particular moment should have been on a direct collision course with the Sun.

Amazingly enough, no such collision, or even a close call, was reported in the news.

Even if we assume that both pilots and air traffic controllers were jointly protecting this "great secret", we have other major consequences to worry about:

Naturally a Sun at such a low altitude would have resided right over the airport, which means that it would have been shining straight from the South at 08:00 in the morning sky of every place between Toulouse and Paris in France, as well as in Lloret de Mar and other Spanish cities along the northeastern coastline.

Again, no such discrepancy was reported in the news: the Sun rose, as always, from an easterly direction, everywhere on Earth on that day. As it does on every day.

It is thus easy to see that with the claimed altitude of 5,000 km for the Flat Earth Sun, the convergence of the rays should have been much, much more subtle than my picture implies, and basing the assumption of the Sun's altitude on this kind of observation fails the reality test.

Why do we see this apparent convergence then?

It is the same phenomenon as what you see when looking at a straight line of railway rails extending towards the horizon: they appear to converge in the distance due to the Perspective Effect.

Yet we all know that the rails continue with the same, fixed separation all the way to the end of the track.

At the time of taking the photograph the Sun was still quite low in the eastern skyline, and therefore the rays were not actually coming down from above, although that certainly was how it looked like. The rays were close to being horizontal towards my observing location, and thus behaved optically like the railway rails.

I was therefore witnessing yet another easily explainable and completely familiar optical illusion.

Another nail in the coffin of the Flat Earth Theory. 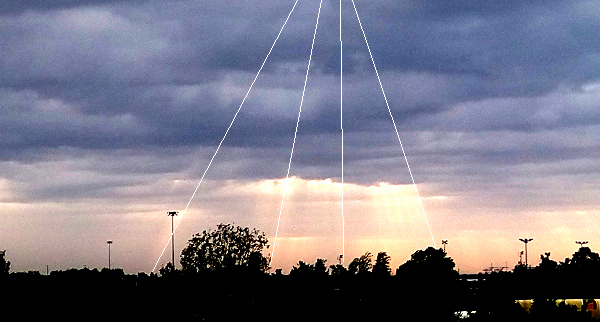 The Sun must be closer than 150 million km, right?