The Soviet Union followed the Apollo missions with their radars and radio telescopes, all the way from the Earth orbit to the Moon and back.

The British followed just as carefully, listening to the transmissions and locating their origins.

The television broadcasts from the first Moon landing were handled by an Australian radio telescope. Just like parts of latter missions as well.

Even individual radio amateurs were able to follow this adventure: after all, it was happening right above our heads, without obstructions, apart from the moments when the astronauts ended up being behind the Moon while orbiting it. All you needed was a suitable antenna, a radio receiver and sufficient technical knowledge.

Mathematically, even the Doppler Effects that were noted on the signals matched the calculations perfectly.

The stones that were brought back were clearly of an extra-terrestrial origin, void of the oxidation processes that happen on Earth, but full of effects that are only possible in the vacuum of space.

The retroreflectors left on the Moon are still used today to measure the distance of the Moon. They reside exactly where the astronauts claimed to have planted them.

Recent probes orbiting the Moon show traces of footprints and tire marks from the astronauts, and, on the last three missions, their electric car. The landing stages that were left on the Moon are clearly visible.

What the astronauts reported and recorded as their activities in various locations can be traced in detail to these visible marks on the surface of the Moon.

The technology of that era was just about capable of making the trips to the Moon and back. It was a huge stretch, but it was done. Six times, and once almost ending in a catastrophe during the Apollo 13 mission.

On the other hand, the technology of that era was not capable of falsifying imagery and live TV transmissions to the level that a hoax would have required. We had no Deep Fakes, no Photoshops.

The trajectory of loose material flying off the wheels of the Lunar Rover followed the rules of one-sixth gravity. Try mimicking that on Earth in real time with 1970's technology...

And to get those radio and TV signals look like they arrived from the Moon, SOMETHING had to be sent there to relay them back to the Earth.

When comparing observations to assumptions, the simplest explanation is usually the correct one: the trips to the Moon happened. Over and over again.

Still there are (add expletive here) that keep on recycling the “Moon Hoax”. And a big bunch of (reuse the same expletive) that believe these claims.

“Only two things are infinite, the universe and human stupidity, and I'm not sure about the former.”

You can watch my tribute to the Apollo program here [youtube.com]. 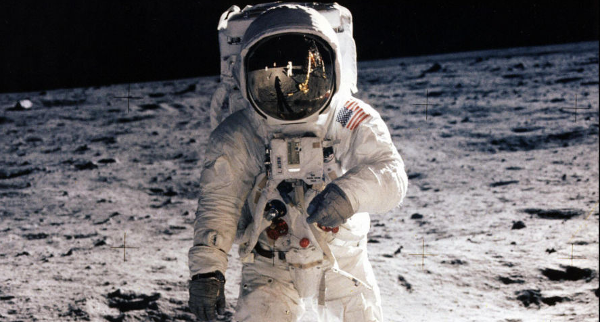 One of the amazing images from 1969