Despite making yet another annual loss of almost a billion dollars in its smartphone division, Sony shows no signs of giving up this business area.

“We see smartphones as hardware for entertainment and a component necessary to make our hardware brand sustainable. Younger generations no longer watch TV. Their first touch point is smartphone.”

Still, if Sony's market share in smartphones remain in the “one percent or less”-category, what actually is the “touch point” he is referring to? Wouldn't it be much more fruitful to team up with some major mobile device companies, offering content and apps that eventually steer the users towards Sony's products?

Unprecedented collaboration like this is in full speed in other areas: Sony announced a deal with "arch-rival-in-gaming" Microsoft, bringing Playstation closer to Xbox in terms of streaming media, AI and game development tools. Sony also announced that it will be using Microsoft's Azure cloud for its content delivery, and even taps into Microsoft's image sensor knowledge, some of which most likely has its roots in the ill-fated Nokia-Microsoft deal.

In smartphones, Sony puts its chips on new 21:9-screen ratio screens, which would allow movie content to be shown without dark borders around the edges. But the devices will become taller and narrower, which does not necessarily make them more appealing for the consumers: in other Internet-related activities, 21:9 has very little advantages to offer but causes yet another set of headaches for application developers.

Sony's otherwise stellar financial performance is tarnished by the 900 million losses from the mobile division. Naturally it can still cover these losses from the profits in other areas, but as time goes by and if the sales do not improve, this highly visible conflict between divisions' results will become more and more of a drag for the whole company.

Big investors, like the hedge fund Third Point, are reportedly upping pressure to bring in changes in Sony, not only in smartphones but also in some movie production areas. Although the scope of such investors hardly is following the extremely long-term Asian model, they are still a stern warning sign for Sony's management: change or you will be changed.

My earlier comments on Sony's woes can be found in this blog entry. 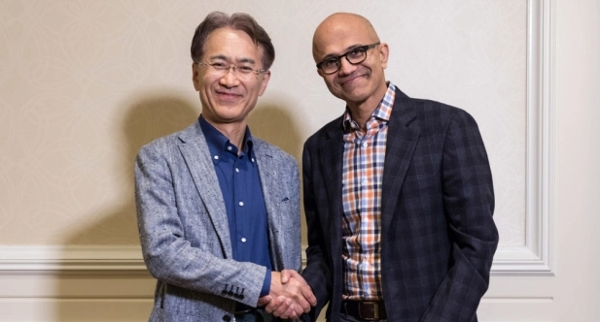 From competition to collaboration: Sony and Microsoft. Image: Microsoft