Setting up a radio network that utilizes channels from Very High Frequency (VHF) upwards has always been geographically limited by two inherent facts:

First of all, frequencies in this range propagate in a straight line from the antenna, with only minimal and often sporadic bending caused by very specific atmospheric conditions. I gave some practical examples of these in my book.

And as these signals won't bend along the Earth's curvature, the round shape of our planet will effectively restrict the distance that can be reached from a single transmitter.

The line of sight distance of the horizon is the square root of the formula:

Therefore, the higher the antenna, the further the line-of-sight path between the transmitter and the receiver can reach. Just the same way as you can see further the higher you stand, which is one of the simplest proofs that our planet actually is round.

The attainable distance grows rapidly as the function of the height, and this is the reason why every broadcasting antenna in the world either sits on top of a mountain or is attached on a tall antenna mast. Or often both.

Today, Facebook and Google are experimenting with airborne high-altitude transmitters: Facebook is building solar-powered drones that can circle over a fixed spot for days, whereas Google relies on high-altitude balloons.

But the history of such systems dates way back: in 1945, Westinghouse, together with Martin Company, built a system called Stratovision. By utilizing airplanes transmitting from an altitude of 30,000 feet, transmissions from one such plane could be received over a circular area with a diameter of almost 700 km. Hence the width of the Continental USA could have been covered from the Pacific to the Atlantic by a chain of just eight planes, as seen in the adjoining picture.

Stratovision was hailed as the solution that would bypass the need of building a network of ground-based transmitter towers, and as the signal was coming “from above”, it would be mostly free from poor reception areas caused by terrestrial obstacles.

Despite all these benefits, the continued building of nationwide transmitter networks quickly bypassed Stratovision: ground-based antenna and distribution cable maintenance costs were ultimately cheaper than the upkeep of a fleet of planes.

Although Stratovision got sidelined from mainstream broadcasting, sporadic use of this system continued in the US up till 1968, including a project that was beaming down educational material in connection with the Purdue University.

Stratovision concept also found its way to some special cases: it was used to broadcast television channels to South Vietnam, both for propaganda purposes for the local population and for entertainment and news for the US troops during the Vietnam war. The same approach was used even as late as during the NATO's operation in Yugoslavia in 1990, as well as during the Iraq war.

But having a plane continuously in the sky, especially if 24/7 coverage is needed, is a costly solution, and only now, projects like Facebook's Aquila and Google's Project Loon are emerging as “cheap enough” alternatives for extending the radio coverage over vast swathes of the Earth's surface.

Systems like these could be quickly deployed to cover an area which has had is terrestrial communications infrastructure temporarily disabled, for example as a result of a recent natural disaster.

Yet, as I write in my book, satellites residing on geostationary orbits have the highest possible coverage of the Earth's surface, simply due to their immense altitude that provides theoretical visibility over one third of Earth's globe at a time.

But despite the recent advantages in reusable rocket technologies, getting that far out into space is still expensive, so autonomous solar-powered drones could turn out to be viable alternatives in the future. 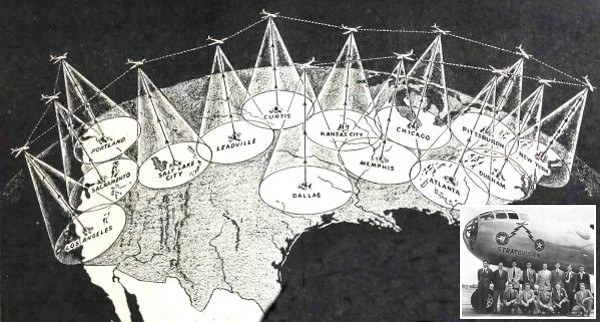