My new home region of Barcelona must be the tin hat wearers' nightmare location: with the almost constantly clear skies and the atmospheric conditions that keep jet trails of planes visible almost as regularly, combined with the fact that the Barcelona VOR beacon is a key navigation point for air traffic in south-western Europe, the sky is often full of criss-crossing jet trails.

Or “chemtrails”, as the conspiracy theorists claim.

The story goes like this: instead of being the water-vapor-rich results of the combustion of tons of jet fuel that form the artificial clouds trailing modern jet planes, the lines in the sky are actually some unspecified cocktails of chemicals that are rained upon us to control our minds.

The fact that the trails clearly originate from the engines is not essential in this scenario, as the engines don't REALLY burn jet fuel, you know: they rotate thanks to some unknown force and just move air. This unknown force and the resulting blowing of plain air is then somehow able to accelerate the roughly 100,000 kgs of a modern, fully loaded passenger jet to a speed of nearly 1,000 km/h.

The millions of tons of kerosene that gets pumped into the wings of commercial jets at world's airports daily is just part of the complicated forgery. What actually happens to this most expensive cost item of airlines' budgets remains a mystery.

All this is done in the plain sight of millions of pilots and refueling crews, which either have to be a part of this conspiracy or absolute idiots for not figuring out what happens under their very noses.

Then there is the issue about amount and altitude: this “spraying” is happening from a device that knowingly moves about a kilometer in four seconds, at an altitude of 10 km and up. It is easy to do a simple back-of-an-envelope calculation and conclude that whatever concentration those chemtrails have is well diluted to almost homeopathic levels (another quackery) before it reaches the ground.

The first counterargument would therefore be: “why don't planes leave these poisonous chemtrails when they are much closer to the ground?”

Physics has the simple answer to that in the form of air temperature, pressure and humidity differences between altitudes, but even the word "physics" is poison to the chemtrail folks...

The fact that the same crap would be affecting the “masters” as well is too far fetched idea to comprehend. I guess the conspirators behind this scheme either walk around in breathing masks or are vaccinated against their own poisons?

But, but… vaccinations are also bad, according to often the same lot that keeps on worrying about chemtrails, so why would the “elite” be willing to poison themselves with vaccines against taking their own aerial poisons? 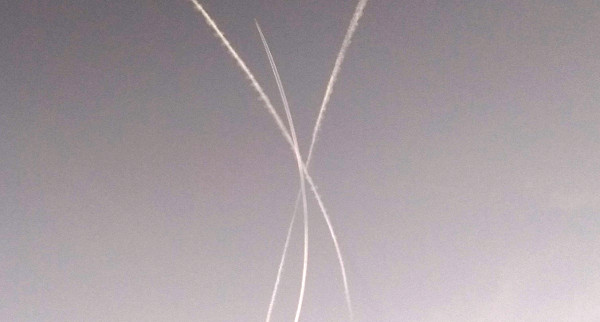 X marks the spot over the Barcelona VOR