Hayabusa-2 has been orbiting the asteroid Ryugu for months now, and last week its expedition moved to the next step: creating a crater with a diameter of several meters on the surface in order to be able to sample the internal composition of the asteroid.

The sci-fi meme of “nuke them from orbit, it is the only way to be sure”, stemming from the Alien movies, is now tested in practice, although naturally not with nukes. And of course, there is no sign of any aliens on Ryugu. But it makes a good joke over what happened...

All in all, the procedure was a very complicated one: Hayabusa-2 launched the 10-kg explosive package towards the surface, and it detonated above the asteroid, sending a copper impactor towards the ground with a speed exceeding 7,000 km/h. Hayabusa-2 itself had to maneuver itself to the opposite side of the asteroid to protect itself from any flying debris: the almost non-existent gravity of the asteroid had no chance of keeping a lot of the flying material in the vicinity of the asteroid after such a powerful explosion.

But while it itself backed away, it left a small probe hovering over the explosion site to record the event.

Initial information seems to verify that the impactor worked as expected, but Hayabusa-2 will wailt for two weeks before returning the the impact side of the asteroid. This gives enough time for any debris to fall back on Ryugu.

The overall complexity of Hayabusa-2's mission is impressive, climaxing with a sample return to Earth in 2020, when the sample cylinder will fall down in Australia.

The Japanese Space Administration JAXA, just like China with its recent Moon missions, has shown that space exploration is by far no longer a game between USA, Europe and Russia. Japan, China and India are increasingly stepping up their own space activities.

Competition is always good, so thumbs up for Hayabusa-2's success. 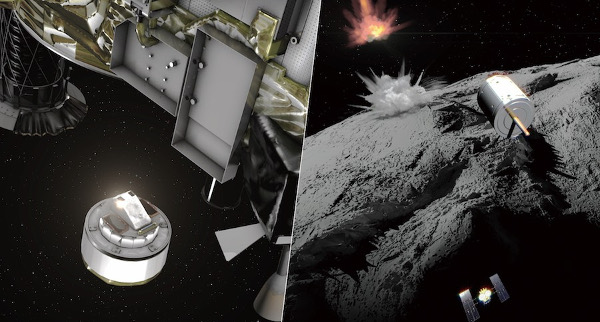 An artist's view on the impactor release and explosion. Image: JAXA