I’m an instrument-rated private pilot. This means that I’m trained to land in weather conditions that completely obscure any visual cues regarding my orientation, speed, position or altitude. I only have the instruments on board to rely on.

It takes a leap of faith to just gaze the instruments and totally ignore the misleading movement cues that your body is incorrectly indicating to you while you can freely move in all three dimensions. But having the edge of the runway finally emerge from the impenetrable weather soup just seconds before touchdown has always been a thrill, and yet another example how the invisible waves have made it possible to perform something that was utterly impossible in the past.

This wireless technology, the history of which I cover in my book, is an indispensable feature that keeps commercial air traffic flowing 99% of the time worldwide. Chances are that you have been on board of a plane that has punched through the fog or clouds at the very last moments of its approach to a major airport.

Any airport big enough to warrant a reliable poor weather approach support has clearly published procedures that indicate a virtual path leading from known waypoints to both edges of the available runways: kind of like virtual lines that align with the runway direction. This is the final path that the planes take when they approach the runway, getting constantly lower as they get closer, usually with a standard three-degree glide path downwards.

Planes need to get fully and safely established for landing during this time, and due to the fact that they are still moving with a speed in the 250-300 km/h range, these standard approach procedures tend to have very long, straight finals leading to the runway, extending several kilometers from the runway threshold. For a propeller plane trodding along at around 120 km/h when “established”, they feel awfully long, but they were designed for the big boys, and everyone utilizing such an instrument approach has to follow the same rules.

Sometimes the urbanization has caught up with the original placement of the airport, creating locations where even a minor misalignment could have serious consequences: for example watching the planes seemingly scrape high-rise buildings while they approach the Congonhas airport (pictured) at the heart of Sao Paulo is a thrill even during a good weather, either on the ground or on board of such a plane. Get something wrong either vertically or laterally and the consequences would be devastating.

What separates us “mere mortal” private pilots from the brass is the equipment available. Although most of the navigation gear is 1:1 between small piston airplanes and commercial jets (except having more solid backup layers), there is one major difference: the big boys are equipped with a radar altimeter.

This is exactly what the name implies: a device utilizing radio waves that bounce back from the ground, and the roundtrip time is then used to calculate the distance to Mother Earth.

The basic altitude reference of aviation is tied to “mean sea level”, and uses air pressure to find out your current level against that virtual line. You then have to do the math based on the reported standard altitude of the airport and its surroundings to figure out your actual distance to the ground.

In comparison, the radar altimeter tells you the actual “hard fact” in real time. And naturally the onboard autopilot takes this information into account in figuring out the current spatial situation of the ongoing approach.

This information is crucial especially at the very last moments prior to getting the wheels on the runway, and getting some wildly varying and unexpected false information at any time during the approach is something that has not been an issue in the past. The known, potential error modes have been incorporated into the landing automation logic and the hardware itself. Any new and unforeseen error modes are therefore prone to cause major issues.

Unfortunately in real life, anything based on radio waves can cause interference to other radio-based equipment if the signal is strong enough. For example, it is not uncommon to lose VOR or GPS information (or both) when passing a high-power television transmission tower. Even when the frequencies in use are quite different, the circuitry onboard can simply get overwhelmed by the incoming signal strength.

This known phenomenon is exactly the reason why the final approaches to airports have restrictions for strong signal sources: if you need to install a new transmitter, it should not be smack in the middle of such a virtual line leading towards the airport.

As I explained in my book, one key to the faster data speeds for 5G was expanding the used radio frequencies towards the higher end of the spectrum. And one of the bands ends up close to the frequencies used by the radar altimeters.

In Europe, this slice of the radio waves was not taken into use for 5G, in the US it was.

This, per se, would not necessary be a problem: you could carefully locate the transmission towers away from critical areas, or limit the use of these frequencies there. And best of all, use horizontally-aligned directional antennas: the expected users of the 5G network are on the ground, so there is no reason to waste energy in other directions.

In USA, for some inexplicable reason, even the simple and well-established approach of using directional antennas appears to have been ignored during the rollout, creating a potentially lethal new situation.

This source of potential interference to radar altimeters took major airlines by surprise, to the extent that many of them canceled flights to US airports. The President of the Emirates Airlines called this "one of the most delinquent, utterly irresponsible" situations during his career.

Considering the list of potentially fatal error modes caused by radar altimeter malfunction, as was recently published by Airbus, this kind of extra caution was a fully sensible thing to do, and the uproar made the US wireless providers to swiftly pull back and re-plan their 5G rollout around major airports.

Add to that the fact that the weather conditions in the US are also at their worst around the time of this deployment, letting this just go without actions could have cost lives. The airlines were right to raise a major stink over this issue.

Now the necessary reworking around this issue, which could have been fully resolved well ahead of the rollout, has caused issues on some less-prominent airfields: for example Paine Field airport in Washington has had its flights disrupted during foggy conditions in January, as the Embraer jets used by Alaska Airlines are not equipped with radar altimeters that are certified for 5G interference.

5G rollout was not a surprise to anyone. Neither were the potential problems regarding specific frequency bands. Not planning for these known potential issues was a major screwup in the most technologically advanced economy of the world.
[Image credit: Wikipedia - Mariordo] 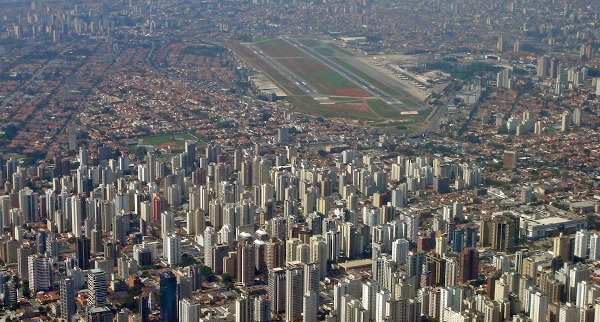 Some airports have no room for error: Congonhas, Sao Paulo