In my youth, being a geekish person often included a hobby of “DXing”, which was about listening to faraway radio transmissions, usually on AM band.

For the most enthusiastic ones of us, this also included sending reports of the quality of the signal, which, although mostly of no real value to the station itself, used to bring back a nice PR pack of the radio station and a friendly thank-you letter.

I personally remember getting a spiffy “Remember that it is illegal to listen to Radio Caroline”- sticker from the notorious pirate rock/pop station that floated offshore of England. The sticker was proudly decorating my little red multi-drawer storage unit that had all my precious electronics components in it – the ones that I used for building stuff from timers for the dynamite detonators (that my friends “found”), to FM transmitters that allowed me to listen to “my” music while outside of the house.

Both pretty much as illegal as Radio Caroline used to be, but growing up in the Finnish countryside allowed a lot of leeway for inquiring young minds who owned a soldering iron.

The quality of the AM transmissions was pretty horrible, but in the era that did not have N channels on radio and TV blaring 24/7, and the MTV channel was still just a wet dream in some VIACOM executive’s mind, getting the newest “Rock Countdown” was enough, whatever the quality.

Step forward into the 21st century, and all this kind of activity has entered the Internet age, as most self-respecting radio stations now offer their material via high-quality streaming.

Finding the links to these and setting up the right player to function correctly used to be a job that still required a reasonable amount of geeky genes, but even that has now evolved into a pleasantly easy user interface.

I am seldom impressed with new software solutions to existing problems these days – mostly they tend to be solutions looking for a problem, but a Dutch service called “radio.garden” that has been around for about five years now is simply awesome. It offers a beautiful, self-explanatory graphical interface into the ongoing worldwide regional culture offering that is being transmitted live around the globe:

Just a warning: it will start playing the station nearest to you (actually to your ISP) the moment you do the first click on the interface.

But being able to jump from Greenland to Gambia in seconds and sample the “radio life as it happens” is another marvelous application of the global inclusiveness brought to us by the Internet. 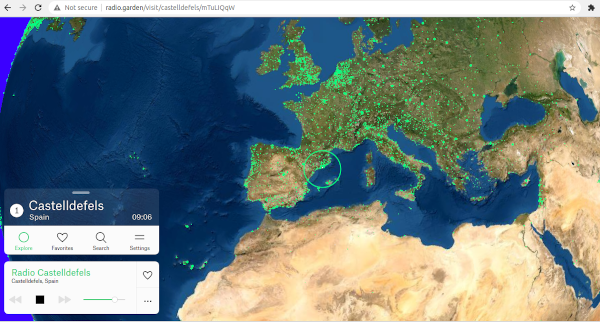 Become a local listener in seconds