Getting roughly two kilos of material from the Moon some 50 years after the Apollo missions returned a total of 382 kilos of it does not sound like a big thing, but the complexity of the Chang’e 5 mission tells a whole different story of the long-term ambitions of China.

It took a total of 23 days to go to the Moon and back, and China’s Chang’e 5 did all this automatically:

First the Long March 5 rocket injected the orbiter/lander combination towards the Moon.

A trajectory correction burn was then made to inject the combo into a Lunar orbit.

The lander separated and descended to the surface, automatically selecting a safe landing spot.

Samples were drilled and scooped into a return canister.

A correctly timed ascent was made in order to accomplish a rendez-vous and re-attachment with the orbiter stage.

The samples were transferred over to the orbiter, which injected itself into a trajectory back to Earth after separating from the lander stage.

Finally, a 300 kilogram ballistic re-entry module hit the atmosphere with just the right angle and speed to end up landing in Inner Mongolia.

As mentioned, the two-kilo haul is minuscule compared to what Apollo program brought back, and fully automatic returns of Lunar material were already accomplished by the Soviet Union via their three Luna missions in the 1970s, making them the second member of this prestigious club.

The 300 grams of Lunar soil brought back by Luna 16, Luna 20 and Luna 24 was done with a direct single-stage Moon-to-Earth approach, without all those pesky complexities of meeting up with an orbiter and transferring material over.

And that is exactly the reason why Chang’e 5 was such a great success: all this added complexity worked perfectly, and proved that China has the technology to achieve the next major milestone: a manned mission to the Moon.

That would make China a member of an even more prestigious club, in which only USA is currently alone with their 12 men who walked on the Moon during Apollo missions.

Strong nationalism seldom brings anything good in the area of politics, but in Space Exploration, it clearly keeps forcing the nations to constantly push the envelope, for the long term benefit of us all.

Add to the picture the new wave of private space companies with great ambitions, and the decades long lull in manned missions beyond the Low Earth Orbit is about to end. 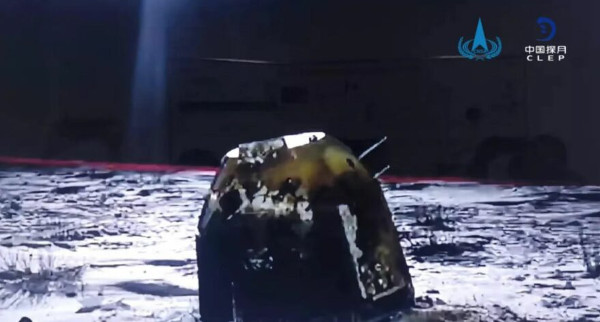 Return capsule on the ground in Mongolia [CNSA/CLEP]