Space Shuttle went through the development phase while I was a kid. I earned some of my first pocket money by writing about its progress. This was way before Internet, so I read about the developments in the English-language magazines and wrote a summary in Finnish.

I was really exited about the news. It was the time of great hope of being able to access space for much cheaper than before. “Re-use” was the keyword that everyone was tossing around.

Unfortunately the reality ended up being very different. The amount of refurbishing that the Space Shuttle required between flights meant sky-high costs and long turnaround times. Calculated over the lifetime of the Shuttle program, one launch ended up costing around 1.5 billion dollars.

That’s a lot per head for a crew of seven, even if you take the ample cargo potential into account.

The two fatal accidents did not help. Access to space was still as expensive as ever, as well as dangerous: the odds of getting killed ended up being about 1:70.

But we got the International Space Station and Hubble. So although the costs were high, it was not money wasted, and space travel will always be inherently dangerous.

Elon Musk's SpaceX has now done something that was deemed impossible by two generations of rocket scientists. They have a man-rated rocket that has the same “Seven Up”-capacity as the Space Shuttle, but this time is really reusable to a point of having a launch cost just a tad bit north of 200 million.

Access to space got close to 10x cheaper, and the projection is still towards lower costs as this new model becomes routine.

And SpaceX is not resting on its laurels and enjoying their record-breaking achievements: the next wave is coming in the form of the Starship project, the prototype of which is about to make its first flight. If successful (or when, based on the history of SpaceX), it will raise the access to space to a totally different level, both in terms of cargo capacity and reach. Not just to the Low Earth Orbit, but within our entire Solar System.

It is rare to see that kind of “quantum leap” improvement steps in any industry, especially in something that is absolutely high-tech and bleeding edge. This should be headline news.

Therefore it is very sad to see that the last gasps of a soon-to-be ex-president take up all oxygen in media, filling the headlines with his daily bursts of tantrumps (pun intended). Looking at the major news web sites, only CNN had a “watch live” banner when the new crew entered the International Space Station. The rest concentrated on the unconstitutional lawsuits spawned by Trump’s team.

My brief summary of the era of space exploration so far can be found here. 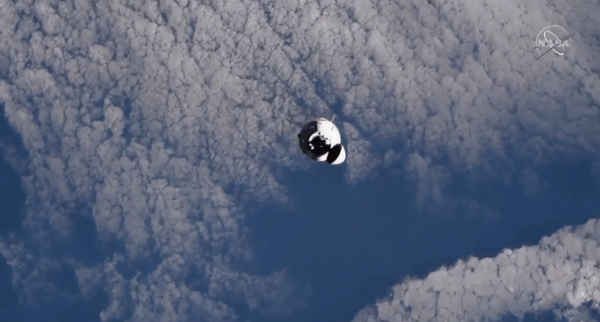 The new "Seven Up" taxi approaching the ISS [NASA TV]