Since having been introduced to Rosie Robot in the cartoon series “The Jetsons”, we have been waiting for the day when robots finally step in and overtake some of the necessary but mundane household chores.

Luckily, one of my least favourite one is reaching the point of being almost completely robotized: vacuuming and mopping the floors.

When I moved to Barcelona, the apartment I ended up renting had the very common setup of flooring that is found in Spain: tiled floors in the bathroom and the kitchen, parquet flooring elsewhere.

This is my favorite setup: I never understood the British drive to install carpets everywhere – an apartment I had in Cambridge decades ago even had carpet in the bathroom, and the carpet in the bedroom had a patch of cloverleaf growing under one seam when we moved in.

I guess you either become immune to asthma if you grow up in an environment like that, or die trying.

After doing the manual mopping of the empty apartment before starting to fill it up with the cheap, cheerful and inherently functional IKEA-ware, I thought that it would be great to test how well the much promoted robotic vacuum cleaners actually perform.

I investigated the market situation and waded through the plentiful reviews on the net, finally purchasing the Roborock S50, which for some obscure reasons is also sold as "Roborock S5" on some other markets. The last thumbs-up for this particular product was its promise to support also microfiber-based mopping of the floors: the only task more boring and tedious than vacuuming.

Setup was simple and by connecting it to the home Wi-Fi, it is also accessible remotely.

Now, after about 400 runs later, I’d say that I’m very happy with the purchase. Even calculating all the expendables (a continuous stream of new side and main brushes, microfiber sheets, and one broken water reservoir for the mop), the cost of an individual vacuuming round is about one euro. The weekly “wet wipe” takes you back by €2.50, because I opted not to wash and reuse the microfiber sheets, just throw them out after single use - cleaning them would need a separate cycle in the washing machine, and most likely the effectiveness of the microfiber is reduced in the wash.

As I live close to the city center, the main unit requires a cleanup about once per month to get rid of the fine black dust (mainly diesel soot from buses and lorries, I guess) that manages to climb up even to the sixth floor, but that is the amount of maintenance that I gladly make. At the same time I also replace the side brush and scrub and wash the main brush off of any grime it has accumulated.

The main brush also goes to recycling every 2-3 months: much sooner than the management software suggest, but there is a cheap supply of new ones on the net, if you just wade through the tens of seemingly identical suppliers of the same replacement parts.

That, by the way, is one area worth putting some effort into if you choose to follow this path: for example, the price of those microfiber sheets varies between roughly one and five euros per unit. Yet they appear to be functionally and even physically equivalent at both ends of the price spectrum.

I have been very impressed with the attention to the detail that this device has. Items like having a tiny brush that keeps the axle clean and resides inside the actual side brush show that we are not dealing with a generation zero device. The designers have clearly listened to feedback and improved the setup.

To get the best results, you have to incorporate the limitations of the robot into your furniture selections. The main point is keeping the dimensions of the robot vacuum in mind when buying furniture, and unfortunately I didn’t do my purchases in the right order – the furniture came first. Therefore I have to manually lift up one small desk on top of the sofa before starting my robot, as it would otherwise block access to one particularly dusty area. I also had to place cork coasters under the feet of my sofa so that the robot fits to go underneath it. That four euro investment created the crucial 5 millimeters of extra headroom that was needed for a clean sweep.

In the kitchen, with the jungle of the feet of the table and the chairs, I had to tape small indicators to the floor to mark the optimal location. Doing this simple alignment ensures that every nook and cranny under the table and chairs gets cleaned up: the path my robot takes while performing this is almost a work of art.

Finally, of course, when doing a wet mop, the four small carpets at the entrance hall and bathroom must be lifted up prior to starting the process.

But I happily perform those small chores instead of manually mopping the whole apartment and shifting all the furniture around, both before and after. For example, there is no real comparison between manually vacuuming under the sofa vs. the robot just sliding underneath and doing its thing.

That's just the kind of automated help that I appreciate.

Due to the round form factor of the robot, it leaves about 3 cm x 3 cm arced area untouched at the corners of the rooms. Again, taking a wet wipe to finish those off about once a month is not too much to ask for the otherwise functional automation.

One area that could be improved in this particular unit is the two filtered valves that feed water to the microfiber sheet: although I always use distilled water, the flow seems to vary between uses, and there is no clear logic on why this happens. Adjustable valves would ensure the best result here, and in the mean time, if the reservoir is still half full after the first round, I just program the robot to do another sweep.

To enhance the effect, I also wet the mop completely before starting.

The management software on the smartphone is a bit quirky at times: after one update it started informing me in Chinese on some of the screens, but that eventually got fixed. Apart from that, the zone cleaning has sometimes been confused, but it is easy enough to carry the device to the room that needs an extra round and press a button.

The management software is also way too nosy in terms of what it asks to know on the smartphone, but luckily you don’t have to enable all of the snooping to be able to use it. After months of me saying “no” it finally gave up asking for extra permissions that have nothing to do with the cleaning process.

All in all, for routine work, the robot dutifully starts from its charging station, intelligently and systematically navigates with its LIDAR through the whole apartment without skipping a single area (apart from those extreme corners), and in my particular case, goes back to its charger after about one hour of zig-zagging around, with plenty of battery left at that point.

Maybe once in two months or so it gets stuck in some tight space, but it simply halts, sends you a message, as well as gives you a voice prompt of the problem, and continues the operation after a slight nudge, without losing its orientation and ongoing room topology map. I have one chair with flat feet that caused the robot getting stuck easily by trying to climb on them, but adding magnetic “no-go” strips removed that problem.

Even with all these minor limitations, Roborock S50 certainly feels like money well spent. It does what it is supposed to do, with almost 100% flawless performance. Being able to run zones is also very useful: when the tiniest indication of dust arises, or some popcorn gets spilled around and under the sofa, I just command it to work. Thanks to this ease of use, it has been active some 3-4 times per week ever since the purchase, either for the whole apartment or some part if it.

As I mentioned, having had about 400 runs so far means that even if it breaks tomorrow, I’d buy a new one in a heartbeat. The cost of a single run has reached a point where the investment has been paid back fully, and apart from some squeaking sounds here and there, there is no indication of any imminent breakdown, despite of it being a fairly complex electro-mechanical concoction.

There is one are of personalisation that could be improved: the device does speak in multiple languages, but an icing on the cake would be if someone hacked together an audio pack with the sounds from the “Family Guy” series. So instead of complaining about a full dust bin, it could say “Need more Lemon Pledge” in the falsetto Consuela voice instead.

That would make it perfect for me ;) 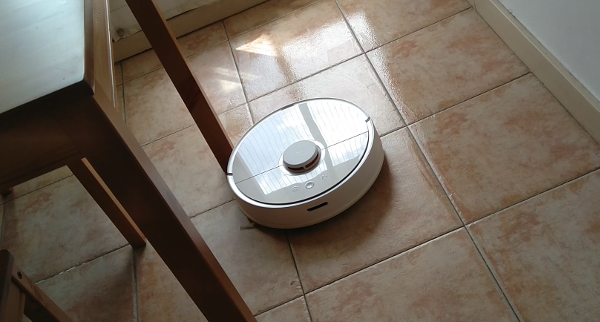