The first true pandemic of the 21st Century is changing our world in an unprecedented way. Our reliance on communications technologies is higher than ever, and the 5G revolution could not be timed more perfectly. Some companies are winners, but way too many companies, and eventually the people behind them, will be losers.

Pretty much everyone still working has been forced to deal with concepts like Zoom, Google Hangouts, Cisco Webex, and even the good, old Skype.

Skype had the early-mover advantage and could have conquered the whole market. But apparently it was handled as a “third-rate citizen” inside Microsoft after the acquisition, allowing the competition to take over. Why Skype for Business still does not work on Linux when all of the rest (including Skype itself) are just fine with it eludes me - come on Microsoft: Azure has gone almost full Linux, why deliberately drive your tech-oriented customers to competing video platforms?

Such ramblings aside, the shift from “commuting to work” to “logging on to work” has been swift and mostly painless. And as a lot of what is considered “work” these days is just sitting in front of a computer, the effects of this “COVID experiment” on our daily lives are truly profound. Companies were forced to do something that they may have earlier hesitated to do: allow more freedom to their employees.

To accommodate this new situation, we have hyper-stressed our communications infrastructure with work-related video data and sky-high Netflix traffix, and it prevailed. The Internet infrastructure, both fixed and wireless, is coping with the new video load. Not with flying colors, but on a very acceptable level.

And all this has happened through the mighty laptop – no need for dedicated video conferencing rooms and expensive equipment: as long as you don’t show that you are attending the conference without pants, everything’s fine.

As for wireless, 4G has proved to be “good enough”. If there’s a glitch in the wired net, jumping to a hotspot has been the instant cure. 5G will just be an evolutionary step, albeit a giant one, but it is still looking for the “killer apps”, as discussed here.

In our particular case at Datumize, we were already fully geared to use "working from home"-mode, as we had several employees and consultants working from remote locations. The pandemic just pushed it to 100% for a couple of weeks.

Among the biggest losers are airlines. It is hard to imagine that the air traffic would quickly return to the volumes that made $9.99 “filler” airfares possible. The days when the taxi ride to the airport cost more that the incoming flight may be gone for years, even though some airlines are still desperately trying to get their seats filled by offering such promotions. Certainly with a loss, considering the reported airline occupancy rates.

Airline industry relied on their data lakes brimming with decades worth of information: years tend to mimic each other, so the airline algorithms were pretty good at filling the planes and extracting maximum value out of the travelers by manipulating the price as a function of time and known already sold capacity. Changing your flights was golden for the airline, bringing in millions of easy extra revenue annually.

All those models are now entirely worthless, and real humans are back trying to guess what the world looks like in six months from now. Even the reservation flexibility must now be provided for free, if you don’t want your customer to go to the competition in these uncertain times.

Just one year ago the prospects for a newly-minted airline pilot were rosy, with airliners competing over them and offering really sweet expat packages, especially in Asia and the Middle East. Now the same pilots are being furloughed and bought off to retire by thousands around the world. There is no easy alternative market for them to shift to: years of extremely costly training has very little inherent value right now, and the recovery of the airlines can take years.

Another big loser is the office rental market: we have now gone through a world-wide involuntarily experiment of “working from home”, and for those businesses that are still having customers, it has been a glaring success.

Virtual meetings are held, documents are shared, messaging and emails work as expected. Life goes on for those who have either managed to dodge the virus, or joined the millions who survived it.

Having a shiny office in a prestigious location is suddenly no longer the kind of status symbol it used to be. Recent example is the Empire State Realty Trust, which made a $20 million loss in the second quarter from their formerly coveted landmark offices. What’s the point of a central location, if the workers only come to the office just a couple of times per month?

The whole, established idea of what it means to live in a city is taking a beating.

Similarly, “a startup in a garage” is being replaced by “a virtual startup in Zoom”. Even the incubator-oriented office rental companies are feeling the heat.

The concept of “holidays” vs “workdays” has morphed into a new model as well: instead of taking the budget flight to another city for a weekend break, the new trend is to rent an apartment somewhere faraway and live there for weeks or even for months, working remotely.

It really does not matter whether you are “working from home” or “working from a beach in Thailand”. The communications infrastructure will deliver your mugshot over the video just as well, practically from anywhere in the world, and the only thing you need to do is to accommodate to the timezone that the rest of the team is following.

Finally, anyone providing services that relied on huge crowds in confined spaces, whether it is regarding a concert or any kind of nightlife activity, are surely feeling the heat. Until there are enough vaccinated people to support herd immunity, these kind of mass gatherings will remain a clear no-no: just one wedding reception in the US has so far been tracked down as the cause of about 150 infections and three deaths. And the scariest thing is that the deaths came from secondary exposure to the initial guests.

One big winner is Jeff Bezos, who has basically quadrupled his net worth, after first having halved it through his divorce. Maybe he could now start paying decent salaries to his employers while waiting for the robots to take over the Amazon warehouses?

I am a big fan of armchair shopping that gets delivered the next day, but the bad press emanating from the working conditions in Amazon warehouses will create inevitable negative Karma in the long run – Jeff Bezos should remember how Henry Ford wanted his production line workers to earn enough to be able to buy his cars. Bezos has enough loose cash to be able to compete with Elon Musk in space activities without resorting to something that resembles a modern-day sweatshop slavery.

The unfortunate side effect here is that the brick-and-mortar corner shops that already felt the heat are going to be further squeezed. Walking around the very heart of Barcelona the other day was a sad experience, as so many bars, shops and other small businesses where shuttered down, right in the middle of the most touristic areas. Here in Castelldefels it looks pretty dire as well: a nice, new cafe opened practically next door just weeks prior to shutdown, and has not shuttered forever. Many other small merchants have been forced to quit, latest a sports shop that I used to pass almost daily.

Barcelona residents used to have demonstrations that demanded to have less tourists visiting the city. But the true value of those “pesky tourists” is now concretely there for everyone to see. You can’t sell a €5 glass of orange juice for too long if everyone around is forced to tighten their belts, and cash-laden, “this is our holiday, so who cares about the prices”-tourists are nowhere to see. Perfect “Sun & Fun” destination countries like Spain are going to be hit hard, and the necessary structural changes will cause long-lasting pain.

Yet, the lovely beaches and the amazing concoctions dreamed up by Antonio Gaudi are not going to go away: one day we have a vaccine and the demand will come back. But probably never on the levels we used to have, and not in the traditional ways that the airline algorithms were able to predict.

Welcome to the COVIDed world. 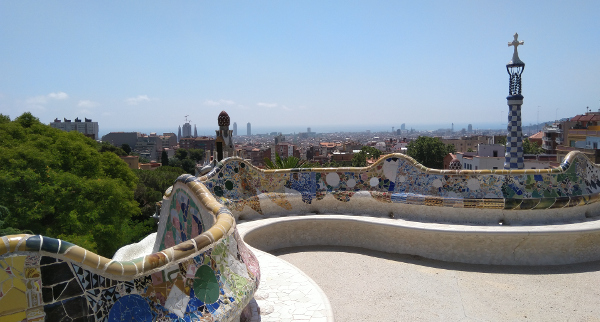 Empty attractions are nice to visit, but won't bring in cash. Park Güell