The initial 10-15 hours of learning to fly are much less glamorous than most aspiring pilots expect:

You spend your time grinding around the airport, remaining “in circuit":

You take off, pull back power and remove take-off flaps, make two 90-degree turns and enter what is called “the downwind leg” of the traffic pattern.

Then you fly past the complete length of the runway, add one set of flaps, make two more of those 90-degree turns and enter the final with full landing flaps set.

As soon as the wheels touch the tarmac, you push the power to the max and switch flaps to take-off position again. And then you repeat the same procedures. Over and over again.

Another part of the learning is to tell the anyone else sharing the same airspace about your movements on the radio, either on the local tower frequency or on what is known as the UNICOM frequency, in case your neck-of-woods training airport does not have a control tower. So you also repeat those radio calls over and over again.

The sole purpose of this is to gain the muscle memory, familiar visual cues and standard radio calls that you will need when taking off and landing – the two most dangerous phases of any flight. Each round around the airport is a “mini-cross-country” flight, teaching you the behavior of the airplane at different speeds and in all normal configurations.

As a result of this, the majority of airplanes that are used on pilot training spend most of their life right next to the runway of their home field, so worrying about things like fuel reserves, max speed and endurance is not an issue. If your reserves run low, you simply stop grinding the circuit and announce that you are coming in “for full stop” on the radio.

The piston engines that are common in the light aviation fleet are ancient in terms of their technology: most of their core design is from the 1950s. They are relatively simplistic, air-cooled high-power engines that have a proven reliability record over many decades.

With all this power comes a short lifespan: aviation piston engines have a “run-time before overhaul”, which means a complete refurbishing of the engine components, of only 1600-3000 hours. Time-wise, this would be utterly disqualifying for a car, but as you fly faster, this still means that you can fly roughly one million kilometers prior to needing an overhaul.

For light aviation, this engine hour factor is just another high-price cost item to worry about, often adding 10-20 euros to the cost of every flight hour.

A major drawback of this high power-to-weight ratio of airplane engines has been the need to use 100LL aviation gasoline. The engines burn tens of liters of this per hour, making it another major cost item. Another hidden negative of 100LL is that it is also highly toxic due to the need of lead derivatives in the fuel that enable the high compression ratio. It's 1950s technology again.

For some decades now, there has been ongoing attempts to replace 100LL with a more environmentally-friendly alternative. This breakthrough has always been “just round the corner” for as long as I have been flying, and even when it eventually happens, the replacement fuel is most likely more expensive than 100LL.

One way to circumvent this issue is to switch to Diesel engines: they use the same fuel as jet engines, and thus would allow the removal of 100LL from the aviation ecosystem: one fuel would be good for all airplanes. But despite the novel Diesel engines being state-of-the art, electronically controlled and much more economical, they still fail to get on a comparable power-to-weight ratio as conventional aviation engines based on 100LL.

And in flying, weight is a big issue.

So why not go electric in the air as well?

The obvious benefits are amazing reliability of electric motors, much fewer moving parts and thus lighter overall weight, and an excellent efficiency: well over 90% of the electricity fed into a motor turns into movement, whereas traditional gasoline engines are somewhere in the 20-35% range. Finally, anyone living next to a busy training airport can also appreciate the considerably lower noise of an electric engine. Not to mention the missing lead in the exhaust fumes, as there are none.

The biggest drawback so far has been the cost of batteries, but the ongoing car revolution is taking that issue down, thanks to the usual price curve of anything that is manufactured in ever-growing numbers. On the other hand, the actual power requirements haven’t gone anywhere: it still takes significant force to keep a 1,000-2,000 kg contraption airborne, so the need for high capacity and thus also high weight in the batteries remains.

Of course, filling up the tanks of a conventional airplane is a question of a ten-minute stop, whereas charging the batteries is still approximately 1:1 in relation to the achievable flight time. Nobody wants to fly for an hour and then wait for another hour for the plane to charge, so this is an issue that needs to be solved as well.

Pipistrel is a well-known Slovenian company in the light aviation world, and they have now cracked this formula with their latest Alpha Electro model. It offers about one hour of flight time, and is solely geared towards the circuit-grinding portion of flight training.

To avoid the long wait times for charging, Pipistrel has replaceable battery banks: when the plane is up in the air, the spare set can be charged on the ground. Another modification in the plans is a water-cooled battery setup that would allow much faster charging times.

The swap-able batteries, along with many other improvements, like the possibility of changing a punctured wheel in just two minutes, aim at offering the maximum airborne hours for the plane in a training environment where the landings often tend to be on the rough side.

Most importantly, although the “standard configuration” price of €125,000 is approximately the same as the price of a conventional trainer aircraft, the hourly cost of flying is about one tenth of the traditional, as engine reserves and 100LL are completely out of the picture.

Owning a flight school is often more a call of passion than a hugely profitable business, but by reducing the hourly costs via a switch to an electric trainer, both the owners and the students will benefit.

The airports of the world currently miss a common charging structure, so for true cross-country flying, the pilot still has to board a plane with either gasoline or Diesel engine. But for a huge number of hours spent grinding the circuit by the rookie pilots, Pipistrel will be the familiar environment in the incoming years.

I personally hope all the best for the company, and wish that Alpha Electro will have the same impact in aviation as Tesla had in electric cars. I personally love flying, and doing it in an environmentally-friendly and affordable way would be a dream come true. 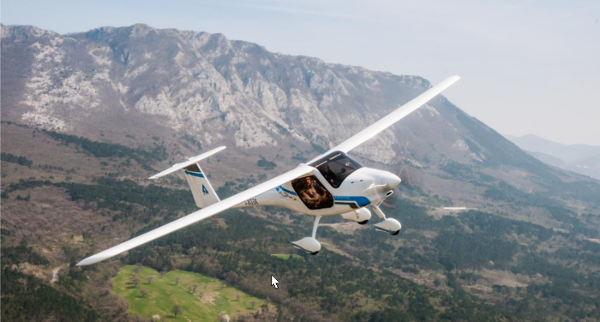 A beautiful mix of electricity and carbon fiber [Pipistrel]