It is true that our miniaturization capabilities have advanced massively over the last couple of decades, and as Arthur C. Clarke said, “Any sufficiently advanced technology is indistinguishable from magic”. But there are still physical limitations that dictate the rules of how far we can stretch this magic in our current reality.

Yet, in this post-fact world, keenly cultivated by the American president and his supporters, such restrictions do not matter: according to a recent study, a stunning 50% of Fox News audience think that the drive to create a vaccine against the coronavirus stems from Bill Gates’ wish to inject everyone with a microchip that allows us all to be tracked.

Let that sink in for a while: Fox News is the largest cable network, with almost four million Prime Time viewers, so we are not talking about just a handful of believers here.

Such a miracle device needs a lot of applied physics to work as expected:

To pinpoint our location, this marvel of miniaturization must be able to receive GPS signals. They are sent in the 1.5 GHz frequency range, meaning that a commonly used quarter-wave dipole antenna is about 5 cm in length.

Many antenna designs work around this length requirement by providing the antenna in a coil or a zig-zag pattern. So if your antenna “wire” is just a couple of microns in size, theoretically you could squeeze one in a space that just about might go through the needle of a syringe. Its performance characteristics, however, would be a totally different story. But let’s not get stuck with such a minor detail for a while.

Naturally, just knowing you location locally is not enough: the “Illuminati” must also be made aware of where you are. So we need a transmitter as well.

The current favorite “bad boy” for all tin foil hatters is 5G, so let’s say that we are using 5G technology for the communications. The highest frequency there is 60 GHz, so a quarter-wave dipole is shrunk to about 12 millimeters. Hence, if we can make a stretch that allows a GPS antenna being miniaturized enough, we surely can add a 5G antenna, too.

Electronics can be made absolutely small, so by throwing out any requirements for capacitive components (that by their very nature require physical space), we can make a vast overstretch and assume that a full-fledged 5G transceiver fits into the allotted space.

But to further complicate things, a transmitter alone won’t do, as in order to be able to join a 5G network, you must be able to both send and receive data. Hence, the amount of required electronics is doubled.

And let’s not forget that the GPS signals need very complex processing with electronics before your coordinates can be figured out. That electronic circuitry must be embedded into your setup, too.

As a reference, a GPS module with an in-built antenna that claims to be the "smallest GPS module in the world" is a cube of 10x10x5.8 mm.

To achieve a hundred-fold reduction in the size of electronic circuitry we must switch to sub-nanometer line widths in our microchips. And that kind of quantum leap would actually be about 100 times better than we currently have: naturally a piece of cake with the kind of money and resources Bill Gates has allocated for his evil plans of world domination...

Even after all this, and with a considerable stretch, we could still say “so far so good”: we have had to take our miniaturization expectations to the wildest maximum, throw away basic limitations of electromagnetic wave propagation, and expect an all-digital, superbly miniaturized radio circuitry for our “sheeple-spying equipment”.

Unfortunately there’s one major obstacle left: despite the assumption of many of the Trump followers, things in the real world do not work on thoughts and prayers only. They need actual energy to work.

“But hey” they say, “my mutt already has a contact-less system that can be read without any internal power, so what’s the problem?”

It is true that the smallest of such near-field RFID chips are about the size of a grain of rice. Millions and millions of dogs and cats have these implanted into their necks, waiting for the day the beloved family pet decides to trek so far from the home that it can’t find its way back again. A nice story about the benefits of such technology can be read here.

But these chips work on the principle of receiving an external electromagnetic field that is converted into the tiny amount of required energy, enabling communications via very rudimentary on-board electronics. No real transmitter, no real receiver. Certainly nothing comparable to 5G technology. And no GPS receiver either.

As a matter of fact, the main issue is right there in the name: “near-field”. The reader device that powers the RFID communications must be brought within centimeters of the chip in order to be able to push enough wireless energy into it for a successful read.

So what other means could we use for power? Put a nano-scale electro-mechanical turbine in, taking advantage of the blood flow? Use a shrunk-down Peltier element to extract power from heat difference between blood and the wall of the vein, or harvest it from the heat of the embedded Plutonium-238 nugget? Or perhaps a teeny-weeny nuclear fusion reactor that exploits the occasional heavy water molecules that pass by in the bloodstream?

And how much energy would we need? A Wi-Fi signal with good antennas can cover about 100 meters with 100 mW of power. A 5G-transceiver together with a functioning GPS receiver would need a couple of multiples of that. The smallest GPS module referred above needs 77 mW to work.

But of course you don’t need continuous power: only a small burst for the “detect location-send location” cycle. Hence you could collect energy for hours and then use it only a couple of times per day: I’m sure such a frequency for "sheeple tracking" would be acceptable for the “Illuminati”, right?

Again, as with capacitive components, the issue is that energy storage needs physical space, which our design does not have.

Sorry, no can do.

Finally, pushing such amount of energy into something that fits through a hypodermic needle would instantly vaporize that device.

A tiny explosion of that magnitude inside your veins might not be good for your health.

As you can see, every aspect of a design of this sort is facing physical limitations that render it impossible, yet a huge chunk of the American public steadfastly believes that such technology exists, and is deliberately planned to be used against them.

Although the Trump presidency has been the catalyst that has brought this kind of stupidity out in the open, it unfortunately is not only limited to the country formerly known as "the leader of the free world." Preposterous claims that should be shot down by a sprinkle of common sense seem to be the rising trend, globally. You can read about another example along the same lines here.

It is so sad that the societies that are 100% dependent of the advances in technology appear to march toward their demise, thanks to the trash that is being spread via the greatest information tool the human kind has ever had: the Internet.

This Internet-assisted spreading of pure, unfiltered stupidity, in the name of "owning the Libs", aided by a handful of TV networks that have the word “News” only in their name, may very well kill us all one day.

[More about the use usefulness of science in our everyday life can be read here.]

This "Bill Gates Tracking Chip hoax" naturally rhymes with the anti-vaccination movement, and the growing support of this scourge can be utterly devastating for a nation. Hence it is not too far-fetched to think that all this drumming up of ridiculous vaccination-related claims is driven by foreign powers looking for ways to destabilize the USA on the cheap, simply by resonating with the existing fertile ground of ignorance via Facebook and Twitter.

Neither of those channels seem to care about the deteriorating situation, as growing traffic of any kind brings in big bucks.

But if the society collapses due to the ongoing unrestricted spreading of false information, that will be bad for mega-corporations, too...

The current COVID-19 crisis should be a wake-up call. 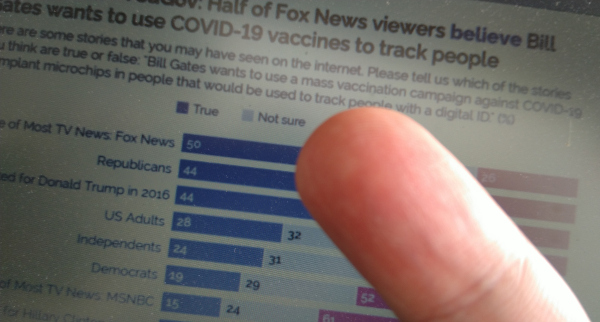 The Bill Gates Tracking Chip placed on my middle finger