A little over a year after the publication of the English version of “A Brief History of Everything Wireless”, I got the news that the Chinese translation rights were acquired by Turing Book, and that the Chinese edition would be coming out in 2020.

In close collaboration with the translator, Miles Jiang, we incorporated some of the fixes and additions from the Finnish translation that was published in early 2019, and Turing Book also opted to follow the approach of the Finnish edition by adding pictures.

As a result, you are now holding the very latest updated and illustrated compilation of “A Brief History of Everything Wireless”.

The developments around radio technology in China followed the same path that is described in Chapter “The Golden Age of Wireless”: providing an easy way of disseminating news to the wide population, eventually culminating in elevating smartphones as the focus of daily interactions for practically everyone. Smartphone-based wireless payments, based on the technology I describe in Chapter “Please Identify Yourself”, are one particular area in which China is clearly in the front line of new technology application.

The rise of China in the area of technological prowess in general would warrant a book of its own: the change from what China was in 1949 and what it is in 2020 is simply astounding. Also, the unique steps that China took during the 3G roll-out, as described in Chapter “Air for sale”, show the leverage that can be achieved when it is backed by the largest population in the World.

Year 2020 also sees the completion of BeiDou, the Chinese satellite navigation system – a domestic application of wireless technology which is as complex as anything that has so far been provided by these invisible waves, as discussed in Chapter “Highways in the Sky”.

The kind of fundamental and rapid development that has happened in China during the last decades has not gone unnoticed, causing recent ripples in the established world order of former high-tech giants.

The result is the growing trend of blurring the boundaries between politics and technology: the rollout of 5G is hampered by the claims of the Chinese manufacturer Huawei having hidden functionality that aids spying without the consent of the network operator. Although no proof of such back doors exists, Huawei is facing a risk of being excluded from some major markets.

Yet, I see this development as more of an opportunity for China: the resulting forced decoupling from the established Western sources of leading-edge electronic components may cause some short-term pains, but China is known to work on a different timescale and has enormous resources that can be diverted to fill the gap.

Hence, I predict that in the long run, becoming more self-reliant is going to be a boon for China and a major loss to the Western competitors, as one of their largest markets dry up and powerful domestic competition arises instead.

We are witnessing the fundamental difference between a quarterly-driven economy and a centrally-led planning that has its goalposts much further in the future, exchanging short-term gains with long-term prosperity.

Hence, the consequences of the “trade war” that is being waged by the current President of the United States at the time of writing this has probably initiated policy changes that may turn out to be extremely negative for the economy of the United States in the future.

The results that can be achieved by such policy changes in an area the size and population of China are astounding: I was admiring the first 100% electric buses in my current home town of Barcelona, Spain, only to find out that the city of Shenzhen had already converted all 16,000 of their buses into electric ones already a year ago.

With the market size of China, even expensive leading-edge technology can quickly achieve the volumes needed to cause a rapid reduction of manufacturing costs, thus benefiting us all.

While the year 2020 is expected to be the breakthrough year for 5G, thanks to the first affordable handsets hitting the markets, the work for 6G has already begun years ago.

One of the leaders in this future generation development is the aforementioned Chinese giant Huawei. The CEO of the company, Ren Zhengfei, noted in an interview in September 2019 that the work towards 6G is progressing well, but it would probably take another decade before we will see the next roll-out.

The details of what 6G will comprise of are still vague, but when it comes to wireless connectivity, we can expect the same kind of development as we have seen with computer chips: whatever capacity you make available, new applications find a way to use it all up, and the users will soon come back asking for more.

The cellular revolution is the biggest fundamental shift that our generation has experienced in our daily lives, and it is always beneficial to understand the myriad of steps that got us here in the first place.

Exactly that is the focus of the story on the pages that follow.

I am humbled by the fact that my story line was deemed interesting enough to be translated into Chinese, and I hope you find it worth your time.

I want to express my gratitude towards Turing Book’s editor Hao Ying and the translator Miles Jiang for the enthusiasm and trust they have shown towards my compilation of the wireless history. 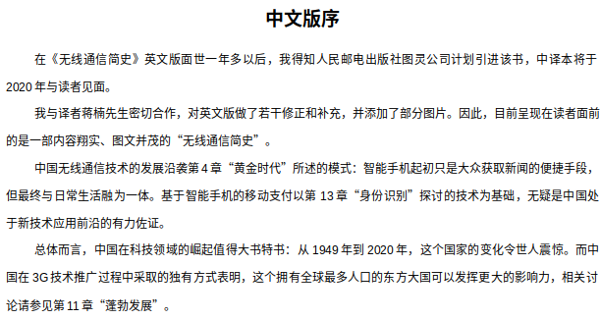 Thanks again for Miles Jiang for the great collaboration