As I wrote here, the dream of launching satellites to space from a huge carrier airplane specially built for this purpose appeared to die along with Paul Allen, the ex-Microsoft billionaire who put his money on various good and often groundbreaking causes during his lifetime.

But the latest news is that the company, Stratolaunch Systems, is back from the dead: the new owner has not been revealed, but fresh job offerings have been posted, including for test pilots. The assumed price of the company was 400 million dollars, which is on par with a brand new 747-8: a bargain for an experimental plane, the development of which has quite likely cost much more than that.

Although SpaceX appears to grab all space-related headlines these days, the revival of this air-to-orbit company is a welcome addition to the booming space business. Getting to an initial altitude of 35,000 feet before the subsequent launch of a carried rocket means that the hardest work has already been done: the air is thin and there is no need to design rockets that have to carry the necessary fuel to tackle the first 11 kilometers of the atmosphere.

The rocket engines can also be optimized for thin-air conditions, instead of being able to handle everything from sea level to almost vacuum.

With a launch system that can be flexibly transferred to any airport with at least 12,000 feet of runway, the destined orbits can also be easily tailored to suit the mission, and weather conditions at the launch site are not a problem: the plane can take off in a middle of a storm and then get to the clear stratospheric conditions above all weather.

At the moment the plan appears to be to use the Pegasus-series rockets for orbital injection. These are conventional disposable rockets, so there is no saving from recovering the rocket itself. But this may change in the future, as SpaceX has clearly demonstrated that reusable rockets are no longer a pipe dream. Hence, designing a reusable orbital injection rocket may be a future possibility, too, taking the overall launch cost down even more.

The price of the company and its single Stratolauncher plane is not the only resemblance with 747 jumbo jet: Stratolauncher’s engines and avionics, including the complete cockpit, have actually been salvaged from two 747-400 series planes. Naturally the switch from four engines to six means that some adaptation to flight controls and cockpit displays was needed, but this approach certainly was more cost-effective than building a completely new cockpit from scratch.

As the planes are very different, it is likely that Stratolauncher could not be adapted to utilize the autopilot designed for 747, but hand-flying even a huge plane like this for these special missions is not a big deal, and probably much more fun for the pilots.

Any progress in space exploration is always beneficial in the long term, and increased competition is good for the customers needing access to space. Whoever is behind the purchase of Stratolaunch Systems should be applauded for their bold move. 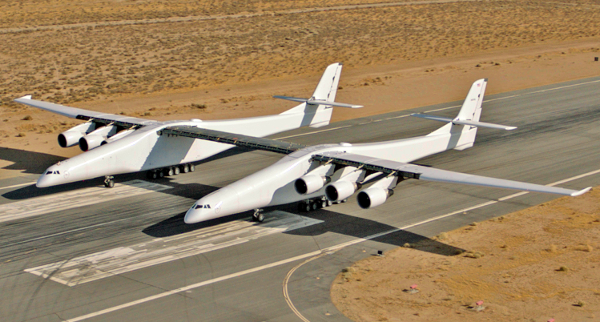