The Space Shuttle entered service when I was in high school. It promised something that no rocket had done before: a reuse model, in which the launch costs were supposed to come down dramatically.

I wrote an enthusiastic article about this novel technology and got it published in a now-defunct local newspaper, Ylä-Vuoksi (see attached picture). I sincerely believed that a new era of space exploration was about to begin: I knew that I could go to space during my lifetime.

Unfortunately the reality turned out to be very different: yes, the Space Shuttle was reusable, but the cost of refurbishing it for a new launch was finally calculated in almost one billion dollars. Each time.

That's a lot of dough for getting just seven astronauts to space, and pretty far from the estimated 11 million 1970's dollars that I wrote in my article in 1977.

Worse yet, when NASA had become convinced that this technology was safe for a major PR operation of sending a non-astronaut teacher to the orbit, Space Shuttle Challenger blew up just after launch, to the horror of the students who had come to watch their teacher making history.

Years later it was Space Shuttle Columbia's turn: it broke into pieces over Texas during re-entry, again killing everyone on board.

All in all, out of 135 Space Shuttle missions, two ended up in catastrophic failure. Not a safety record to be proud of, and considering that each of the five Space Shuttles were expected to fly over 100 times, a truly miserable overall mission count.

The last flight of Space Shuttle happened in 2011, and when it was over and Space Shuttle Atlantis was retired to Kennedy Space Center, the former indisputable space power, United States, had no way of getting astronauts to space.

The country that got men to the Moon was grounded.

NASA gave up on the hope of reusability and went back to conventional rocket model, but the new version that was named Space Launch System (SLS) has gone from delay to delay, and its projected launch costs have kept on creeping alarmingly close to what a Space Shuttle launch used to cost.

In the mean time, the Russian Roskosmos reaped the benefits: in order to get astronauts to the International Space Station (ISS) and back, NASA had to use the age-old Soyuz technology from Russia. Russia got a nice boost of foreign currency that kept their own twindling space activities afloat, and as they increased the launch cost every year, it eventually ended up costing more than 80 million dollars per astronaut for a round trip to the Space Station.

Instead of investing the “free money” flowing in from NASA into redevelopment activities, Roskosmos just kept the lights on, recycling the Soyuz technology that dates all the way back to the 1960s.

This reliance of status quo by not only Roskosmos but also other space launch companies gave birth to Elon Musk's SpaceX, which last week successfully launched their Dragon Crew Capsule to space, delivering not yet astronauts but 200 kg of cargo to the International Space Station.

The first manned flight is expected later this year.

Hence, by first revolutionizing the rocket technology with their reusable rockets, SpaceX is now finally getting United States back to the manned spaceflight game. Most importantly, by being able to carry up to seven astronauts per launch and with a launch cost about half of a single seat on Soyuz, the cost of going to space and back is coming down to single-digit millions per astronaut.

And SpaceX does not stop here: their Starship program is aiming at providing a mass-transport system that can take crews of several tens of astronauts all the way to Mars and provide cargo lifting capability that can be used to build vehicles in orbit that are eventually able to span the whole Solar System.

Relaunchable rockets were deemed impossible by NASA as they reverted back to disposable rocket technology after the Space Shuttle. SpaceX, with private original funding, has shown that what was deemed to be solid understanding of “rocket science” was just plain wrong.

SpaceX is rapidly eating the lunch of earlier established companies like Boeing, Arianespace and Roskosmos. They have to either adapt or die: by showing that rockets can go up and come down in one piece for immediate refurbishing for a new lauch within just days, SpaceX is paving the way to increased competition in the access to space.

And competition is good in terms of the cost of final product: the human access to space.

My musings on the space history so far can be found here. 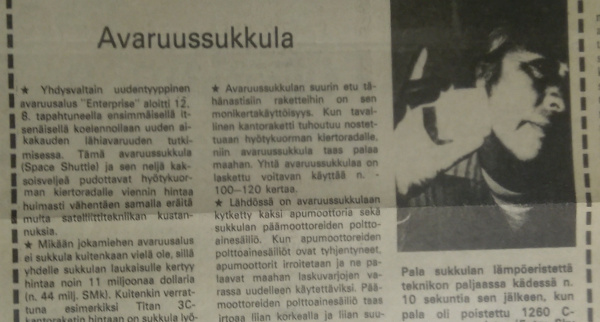 My enthusiastic article on Space Shuttle in 1977