Ever since the existence of the North Magnetic Pole was detected, it has been observed to be moving towards Siberia from its original location in Northern Canada.

Due to this movement, the World Magnetic Model that is used to calculate true north has been updated every five years, and the next update was due in 2020.

But this shift has sped up lately, currently changing its location by about 150 m per day.

Therefore the National Oceanic and Atmospheric Adiminstration (NOAA) published an “unscheduled update” this week, aligning their model to the current position of the magnetic pole.

The effects of the Earth's magnetic field on nature are much wider than most of us expect. While we humans seems to be totally oblivious to it, the annual migration of millions and millions of birds rely on the magnetic field, and even crazing cows and deer are observed to align themselves according to the magnetic field lines. A German study came to a conclusion that dogs prefer to poop in a north-south orientation.

But although we humans don't care about the magnetic alignment of our toilet bowls, our modern society is deeply reliant on the correct magnetic alignment information. Having our models pointing at an outdated North Magnetic Pole would be enough to cause issues for long-range navigation in situations where no other navigation means are available. An example case of this is underwater navigation of submarines.

Why this movement of the magnetic pole is speeding up remains a mystery: the magnetic orientation of ancient sediments indicate that the magnetic poles have even flipped several times in the past, and these flips may have a period of tens of thousands of years during which the Earth's magnetic field weakens so much that its protective property against the charged particles streaming in from the Sun may totally disappear.

The missing magnetic field on Mars is assumed to be one of the main reasons why Mars has lost its atmosphere over millions of years: the constant stream of Solar Wind has stripped the atmospheric molecules out to space.

As the changes happen over tens of hundreds of thousands of years, this current drift is not an imminent problem to our environment, but the fact that we don't completely understand the underlying mechanism of geomagnetism just goes to show that there's still a lot of unknown physics related to our home planet. 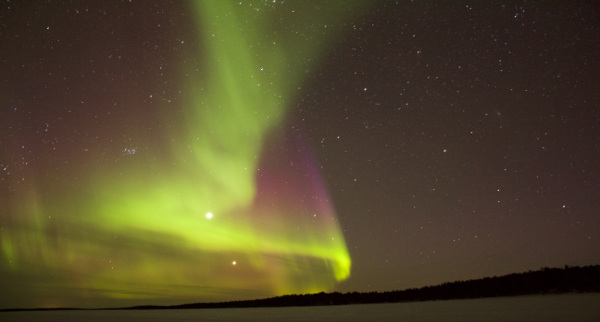 The aurora only happens near to the poles, thanks to the Earth's magnetic field