Landing a probe on the Moon in this day and age is no longer a major challenge: the probe can be provided with enough local computational power to find the right spot to settle down on their own. It is being done repeatedly on Mars, for example.

Therefore the fact that China used their “spare” Chang'e 4 space probe to land on the far side of the Moon was not the major news here. What was totally new was the fact that China had a communications satellite orbiting the Moon, and was thus able to provide live connection between the ground control and the probe, even though the probe's radio signals would otherwise be totally blocked by the Moon itself.

As I explain in my latest book, the rotation of the Moon is tidally locked to Earth: over millions of years, the rotation period of the Moon around its axis has been synchronized to its orbital period around the Earth, thanks to the overwhelming tidal force caused by Earth's gravity. Therefore the Moon does rotate around roughly once every 27 days, but it takes the same amount of time for it to complete one orbit of the Earth.

Due to this lock, the visible face of the Moon remains unchanged to us on Earth, which creates the notion of a “far side” of the Moon.

And just like Pink Floyd mentions in one of their classic songs, “there is no dark side of the Moon, really”: the far side will experience the same two-week sunlight cycle as the side that is facing us, but when we see a full Moon, it is pitch dark on the far side.

Although we have for decades now been able to take photographs of the total surface of the Moon with great detail, no probe has so far landed on the far side. The obvious problem would have been that there was no way to transmit any images or data to Earth. Any signals either way would be blocked by the Moon itself.

The Chinese solution has now changed this: by placing a communications satellite on an orbit from which it is able to see both the far side of the Moon where the Chang'e 4 landed, and at the same time have line-of-sight signal path to Earth, this satellite can act as a relay between the ground control and the probe.

Therefore it was possible to see the video feed of the landing of Chang'e 4 in real time, as well as keep on following the ongoing operations of the rover, Yutu 2, which has now started its mission after rolling off Chang'e 4 (see the attached picture).

The same kind of relaying of signals has been done before on Mars, but this was the first time it has been done in connection to operations on the far side of the Moon.

China is showing that it is serious in its attempts to become a true space-faring nation. This is good, as any national competition in the area of space is going to bring new, exciting results that will benefit us all.

Like it or not, any new “red boots on the ground” on the Moon would really kick the competition in space to a higher gear. I wish all the best for China in this area of technology. 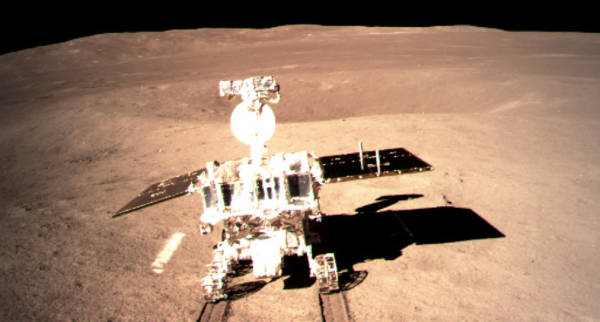