I wrote about the pending Ultima Thule encounter in this blog entry, as well as referred to it in this one. And as the year 2019 was on its first moments, NASA's New Horizon space probe finally passed this Kuiper Belt object.

Kuiper Belt is a wide stretch of space beyond Pluto, and it is expected to have billions of boulders of various sizes, which are leftovers from the birth of our Solar System. Occasionally gravitational interference causes some of them to plunge towards the Sun, creating the beautiful celestial show of a comet in our skies. But most of them just float “out there”, as historic relics, planetesimals: examples of the very first building blocks that eventually formed all larger bodies in our Solar System.

As the material is over four billion years old, getting any kind of information from it could fill the gaps in our understanding of how the planetary formation happened, and by chance, New Horizon's trajectory could be matched with one of these, aptly named as Ultima Thule.

During the early hours of New Year's day, New Horizon reached its target. With a speed of over 50,000 km/h, there was no way of stopping in order to take a closer look, so all we could get was some pictures and measurements taken during the brief moments of this flyby.

As I explain in detail in my book, the huge distance of the New Horizons probe severely restricts the data transmission rate that can be used for communications. Therefore it took about a day before even the first images were received at Earth.

But they did not disappoint: the attached color-corrected image shows the rough surface of Ultima Thule, and NASA has the continuously updated collection of further information here.

The form of Ultima Thule is another good example of gravity at work: first, items in a small debris field got clumped together, forming two balls that eventually were pulled together due to the gravitational force that they inflicted on each other: the “collision” was merely a bump, as can be seen from the fact that both balls have kept their original form. This was not the kind of event that has caused the craters on the Moon or the Arizona Meteor Crater on Earth, just a gentle “come together” of two objects in the course of a million years.

The "snowman"-like combination of two balls is also another proof of the fact that everything in the Universe eventually optimizes its shape into a ball, thanks to gravity. The process of "filling in the gaps" can be clearly seen in its early phases from the fact that the "neck" of Ultima Thule is already getting covered by brighter, younger material. This fundamental end product of gravity is one of the subjects of my recent book, Flat Out Wrong - The Overwhelming Evidence Against Flat Earth.

The two-part name “Ultima Thule” was kind of a premonition: as the object is clearly a combination of two planetesimals, the larger one is now called “Ultima” while the smaller one is “Thule”.

Thanks to the slow data transmission speed, more images and measurement information is still being streamed from beyond Pluto for the next several tens of days, and that new, vast collection of data of an unforeseen object type in our Solar System is going to keep scientist busy for years.

It will take at least ten more years until New Horizons has passed through the complete Kuiper Belt, so if the spacecraft remains in good condition, more encounters like this could be planned for the incoming years. 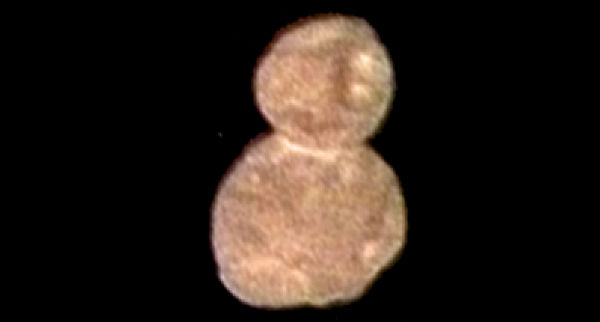