As I discuss in my book, the issue of connecting headphones to mobile phones was a problem in the early days: anything that radiates radio waves is potentially affected by the wiring attached to it, and hence all manufacturers originally insisted on only allowing custom-designed headphones to be connected to their devices.

It made the life of an RF engineer so much easier by reducing the number of unknowns in the setup.

But as the functionality expanded and the phones morphed into media consumption devices, pressure from customers eventually forced the introduction of a standard 3.5 mm audio plug on the phones. The engineers just had to work a bit harder to eliminate or at least minimize any effects resulting from the addition of unknown extra wiring to the devices.

And today, the fact that you can attach any headphones to any smartphone is the norm that the consumers expect. The younger generations have never been introduced to the jungle of proprietary audio connectors on the phones, and trying to set up a restriction like that would not be accepted.

This solution that was first commercially introduced by Sony in 1964 is still the de-facto optimal way to connect audio devices.

In their endless quest of trimming the last micrometers of their thickness and final cents of the cost of their hardware (which is then sold with an exuberant markup anyway), Apple dropped the 3.5 mm audio plug. As a result, the users of wired headphones have to use a clumsy lightning-to-audio adapter. The more sinister aspect for this change is to inconvenience users so that they are driven to buy expensive wireless headsets. Preferably from Apple or their subsidiary Beats, of course.

Using the lightning adapter is even more ridiculous proposition if you think that you can't listen to music and charge your device at the same time. So anyone who binge-consumes media is forcefully driven towards the wireless experience, and most customers go for the easy Apple/Beats solution, as they are afraid of potential cross-manufacturer issues.

Those of us who have been ever exposed to the laptops from Apple know that, in order to do any serious work in corporate context, you have to haul around a bag of adapters. And usually the one you need is still back on the table at home. That extra inconvenience, along other practical reasons, has kept me using Linux on generic well-equipped laptops for some 15+ years now.

Ditching the 3.5 mm adapter from smartphones is squarely in the same category. It just makes the end users' life harder, without giving any real advantages in exchange.

The recent trend of making water-resistant devices is no excuse: there are plenty of devices from several manufacturers that boast an IP68 rating and still have a 3.5 mm hole in them.

The worrisome fact is that even Google and Samsung, which originally made fun of this change, have now started introducing devices without audio jack.

I hope that enough customers will vote with their wallet and go to other alternatives instead. Having gone through a considerable spectrum of Bluetooth headphones in my life, there is still nothing that beats the price/quality ratio of the 20-year old design of Sony's MDR 7506 audio experience. If I want to really listen to music, that's the headphone I want to attach to my device.

Without any ridiculous adapters.

As my daughter commented when I bought her a pair to replace simple in-ear headphones: “I never thought music could sound so good.”

Yes, they do not match the quality of Sennheiser reference headphones costing twice as much as your smartphone, but for about 80 dollars, this solution Beats (pun intended) every wireless headphone there is.

No worries over discharged headphone batteries either.

Sony may currently have major problems in the smartphone scene, as I wrote in this blog entry, but they surely have some time-proven products in the pure audio side of the business.

And if I want to go wireless with my MDR-7506, for example while watching TV, there are plenty of Bluetooth receiver adapters to buy. 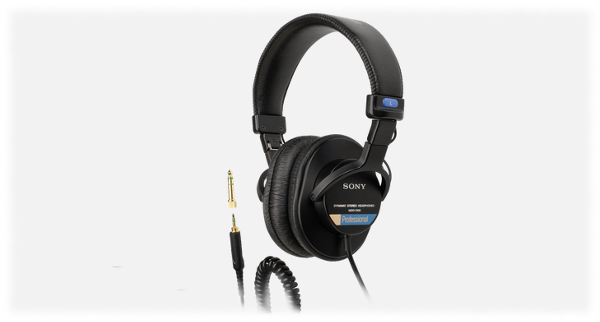