Finland was celebrating its 100 years of independence last year, and one of the highlights of the celebrations was supposed to be the launch of a CubeSat made by the Aalto University. Unfortunately the Indian PSLV rocket that was chosen for the launch had issues and the lauch schedule was delayed.

Yesterday Suomi-100 finally went up onboard SpaceX's rocket, just before this year's Independence Day of December 6th, and thus it can now start its mission: examine space weather using a special radio measuring device, specifically studying the conditions around aurora. It will also take pictures, mostly focusing on Finland, and from the technology point of view, it has experimental 3D-printed plastic parts as part of the structure of the satellite.

Other events yesterday were the successful launch of the latest Soyuz rocket, which was the first attempt after the spectacular failure of the previous Soyuz. Roskosmos did an amazingly fast turnaround with the accident investigation, partly due to necessity: the window for paid Soyuz launches is rapidly closing as Boeing and SpaceX are getting their crew launch vehicles ready.

A stunning picture of the ascent of the Soyuz was photographed from the International Space Station (see attached picture).

Finally, NASA's OSIRIS-REx reached asteroid Bennu. This is the smallest object ever orbited by any satellite (Bennu is just under 500 m wide), and OSIRIS-REx will track it in order to gather more info on these potentially dangerous near-Earth satellites: Bennu has the second-highest cumulative rating on the Palermo Technical Impact Hazard Scale.

OSIRIS-REx will also eventually grab a surface sample of the asteroid and return it back to Earth in 2023.

So, if you are a Flat Earther, and "space" is not supposed to exist, our global conspiracy of Round Earthers had a busy day yesterday...

More on this twisted attitude towards the shape our home planet, and why it is simply wrong, can be read in my new book, “Flat Out Wrong: The Overwhelming Evidence Against Flat Earth”. 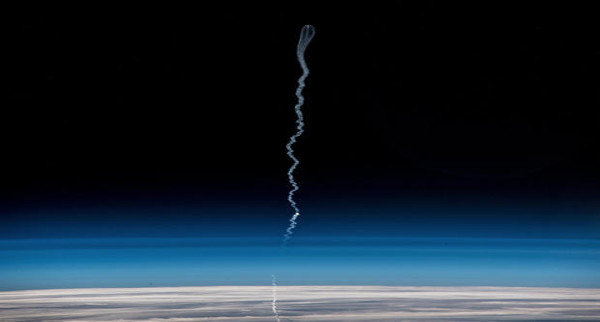 Stunning view of the Soyuz launch from orbit