NASA lost manned access to space when the Space Shuttle was retired in 2011. This was a major embarrassment for a space-faring nation with a history of glorious achievements: to get people up to the International Space Station, NASA has had to rely on 1960's Soviet era technology and hitch a ride on the Soyuz rockets.

[Update: now even Soyuz had a problem, so at the moment, the gateway to the ISS is closed.]

Space Shuttle promised reusability, and yes, the orbiter was reused, but it still cost a billion dollars per launch. Somehow NASA saw this as a dead end for any reusability dreams, and contracted Boeing to make a new rocket that was just a redo of the Apollo-era single-use approach, spiced only with the advances in material technologies and solid-state boosters.

This Space Launch System (SLS) project's initial budget was 6.2 billion, but by August this year, already 5.3 billion has been used, and not even the core stage of the rocket has been delivered. The new estimate is now 8.9 billion.

Not only the costs have been underestimated. But also the timetable is slipping by years.

If Boeing were the only game in town, this would be business as usual, but in the mean time, a competitive startup in the form of SpaceX sprouted, and it fixed the reusability problem: whilst the SLS launch cost in its heavy, 130 ton payload configuration is still in the billion-dollar range, the new Falcon Heavy carries half of that to orbit for a mere 90 million dollars.

And Falcon Heavy flights are on sale now, whilst SLS will take years to complete.

What's worse, SpaceX is working on an even more powerful rocket, the BFR, and just announced the first “tourist flight” around the Moon to happen with it in 2023: the same year that SLS is supposed to launch its first manned flight.

If (and it is still a big if) SpaceX pulls off the BFR promise, the cost comparison between the BFR and the SLS will look absolutely ridiculous, and the technological comparisons between these two, nearly simultaneous launches do not bode well for the future of the SLS.

To me it looks like we will see some “reduced version” of SLS to come into existence, and then it simply fades into the pages of “old-style” space projects.

The changes that companies like SpaceX and Blue Origin are forcing on the launch industry can only be described as highly beneficial to the business of space exploration, and again prove that competition is king if you want to lower your costs.

My short summary on NASA's history in space flight can be found here. 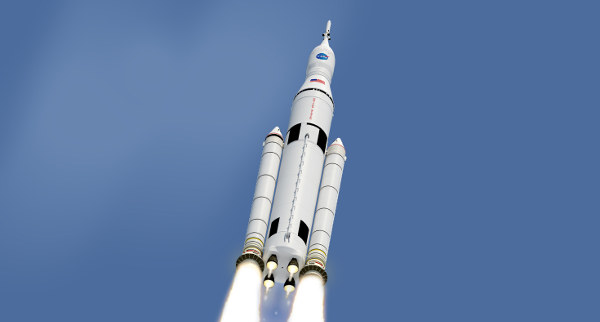 The SLS currently only flies as a CGI image. Source: NASA