In 2005, the attempt by the Japanese Hayabusa space probe to land a “rover” on an asteroid failed: while the rover deployment command was on the way, Hayabusa started an autonomous altitude correction, causing the deployed rover have enough speed to escape the minuscule gravitational pull of the asteroid Itokawa: it tumbled into space and was lost.

Now Hayabusa-2 has tried it again, and last week it got the first two rovers on its own target asteroid, Ryugu.

The term “rover” is used in a very flexible fashion: as the gravitational pull is almost non-existent, the rovers are using a flywheel-mechanism that gives them enough momentum to “jump” around the asteroid. As the landing zone is pretty much random, this is always a risky procedure, but the fact that three or Hayabusa-2's rovers are identical gives it a better chance to comprehensive data collection.

Even though the rover of the original Hayabusa was lost, the main probe still returned back to Earth with a micro-sample of the asteroid material, showing that the material of Itokawa's surface was at least 8 million years old.

Ryugu is one of the “proto-asteroids”, assumed to be remnants from the period when the Solar System was formed. Again, the main goal for Hayabusa-2 is to return samples back to Earth in 2020, hopefully giving us better understanding of the history of our Solar System. This time the plan is not only to sample the surface but also get “fresh” material from deeper down by artificially blasting away some of the surface material with 4.5 kg plastic explosive.

The probe itself will park on the other side of the asteroid to avoid being hit by any of the blasted-out material.

This mission is a magnificient presentation of the level of our complex space technology today: we are no longer talking about just fly-bys, but plan to perform remote sensing with varying orbits, launch rovers, take complex samples and return them back to Earth. Just getting there and being able to transmit pictures like the one attached is a major achievement, and if we get samples back in 2020, the whole process shows once again how Japan has grown to be one of the leading space exploration nations for extremely complex missions.

The cost of Hayabusa-2 was about 160 million dollars. As a comparison, the Rosetta space probe that launched the Philae lander on comet Churyumov–Gerasimenko cost 1.8 billion dollars.

Of course, this is not a fair apples-to-apples-comparison, as Rosetta was much heavier, but it shows the trajectory of space exploration costs: they are going down, thanks to technological advances. For example, both Hayabusa probes use an ion engine, which produces very little thrust but can run over very long periods, so they are perfect for multi-year expeditions. The additional benefit is that they are lighter and need much less fuel, further reducing the weight of the probe.

Hayabusa-2 will remain next to Ryugu until December 2019. It will have roughly 30 kg of propellant left when it has its rendez-vous with Earth in 2020, so it could fly out again and meet another asteroid as a mission extension. 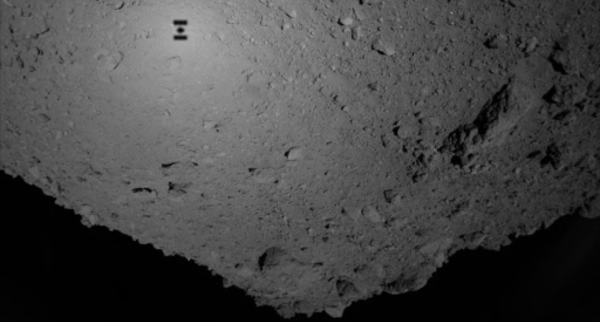 Hayabusa-2's "shadow selfie" on the surface of Ryugu. Image: JAXA