One of the conspiracy theories on the wackiest side of the scale is the claim that the Moon landings were fake: some really believe that in a highly competitive, internationally and politically tense space race situation, all other countries, including the bitter rival Soviet Union, would just have sat on their laurels as their own scientists unequivocally proved to their leaders that the Americans were just faking it.

And just for the fun of it, the Americans did not risk getting caught only once: they re-did it all six times, plus one nearly disastrous time as a bonus.

Naturally other countries did not have anything suspicious to reveal: they had the necessary technology to track the Apollo flights and listen to all of the communications, including receiving the television feed that without any doubt was arriving from the Moon. One of the main communication links was actually in Australia.

So even in the best case, the "fake Moon landing studio team" of Stanley Kubrick, as the tin hat wearers claim, should have needed to send their video to a transponder on the Moon in order to rebroadcast the show back to Earth, which means that something must have landed on the Moon at least once.

Claiming a conspiracy around the Moon landings is actually very silly, as on the latter flights the astronauts even had a lunar rover for transportation, and the way the lunar soil flies off the wheels of the rover follows exactly the mathematics of a gravity field that is only one sixth of that on Earth: try simulating that in real time in a studio on Earth with the technology available in the 1970s…

But facts like this have never mattered to the conspiracy theorists: a shadow that looks a bit off on a random picture taken by the astronauts is enough for them as an “undisputed proof” of a conspiracy that needed the collaboration of almost half a million people.

Plus the silent acceptance of all technically advanced foreign governments of the era, of course.

There is now a brand new treasure trove for these pathologically suspicious tin hat-wearing basement dwellers to dig into: NASA, together with the University of Texas, have released 19,000 hours of digitized audio from the Apollo 11 flight. These recordings encompass every single communication between the astronauts, mission control and back-room support staff during the entire mission.

All in all that is over two years' worth of non-stop audio, covering the multitude of supporting events needed to enable that epic 11-day journey.

Wading through that pile of history and looking for “indisputable discrepancies” should keep the conspiracy theorists busy for a while: surely looking into this fresh “evidence” of the “biggest hoax against the mankind” will take the front seat from other pathological crap like Chemtrails, Pizzagate and Flat Earth related “research”, right?

The quest for the ultimate proof of this conspiracy theory starts here. Just a word of warning: it is all raw data, copied from original tapes. Not much helpful indexing information at this point except for the tape and track numbers.

Of course, it's done this way so that the “truth” would be harder to find, not because they wanted to give us all original data as it was recorded...

Luckily, there are also earlier annotated versions of the flight communications for those who are not so hard core into tin foil consuming business: Apollo 11 Flight Journal.

As for hard evidence, the Apollo landing sites have been photographed by the Lunar Reconnaissance Orbiter already seven years ago. These images show tracks and objects on the Moon at exact locations that match the events during those landings. Japanese SELENE 3D-mapper data also exactly matches the hills on the background of Apollo 15 images. We are not only dependent on proof created by the "lying" NASA.

For the tin hat crowds that can only mean one thing:

The Japanese are deeply into this conspiracy, too.

Regarding the history of the space race in general: a couple of years ago when I was first experimenting with the Django framework, I made a website summarizing the state of the "space race so far" as a programming exercise. You can find it here. 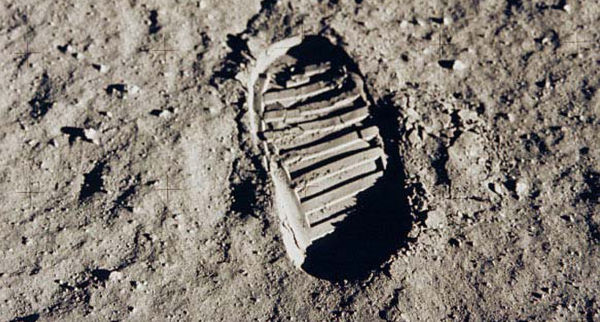