Nokia got the first major 5G deal from T-Mobile. Will it open the floodgates for 5G?

It's been a roller-coaster ride for Nokia in the past couple of days: the last set of quarterly results were below expectations, and despite promises of a “robust end of 2018”, the stock plunged almost 10 %.

Two weeks ago came the the first proof that the CEO Rajeev Suri was not lying and that the end of this year might actually turn out to be good: Nokia announced a 3.5 billion dollar 5G deal with the US carrier T-Mobile.

The market did not believe in it much, though: the stock was still going down even this week.

This was one of the largest deals Nokia has ever made: why is there no sign of euphoria?

I think that until we see a major uptake in 5G infrastructure orders, the market is in a waiting state: 5G is a major investment, and there is no similar push as what happened when the world was going to 3G.

4G LTE is still going strong, and the growth of mobile services is not as intensive as it has been in the past decade. 5G is yet to show a “killer app” that would create a frenzy around it. The upgrade waves are calming down, as the mobile networks in many aspects are “good enough” already.

Some operators are also cutting the hype by advertising their "4.5G" upgrades.

As I wrote in the book, 5G is more of a supplemental step than revolutionary start for a new era: higher frequencies would require very dense base station network if deployed everywhere, which is economically not feasible. 4G LTE is going to be the backbone service for the foreseeable future.

But on the deal level, this really is a major event: although T-Mobile is only #3 on the US market, they have been aggressively pushing new ideas and are considered as a progressive company: they are well known by their unprecedented moves, like the Summer of 2016 free roaming for their customers visiting Europe, free airtime on GoGo airplane Wi-Fi networks, and their deal with Netflix.

T-Mobile was also one of the winners in the last year's US frequency auction, the bandwidth of which they promised to assign into improving rural connectivity, so they are clearly pushing forward on all fronts.

Personally, as a frequent visitor to the US, T-Mobile has been my choice for a local SIM card for years: they provide an easy-to-maintain pre-paid mobile data service, whereas other operators don't seem to understand the kind of needs that temporary visitors to the country need: how many visitors to the US can show a credit card with a billing address in the US? Why would that even matter for a $10 top-up of mobile data?

Nokia is well-positioned for 5G: their ReefShark technology is top-notch, and they have been investing huge amounts of money for this incoming major change. You can find link to the ReefShark system video at the gallery section. 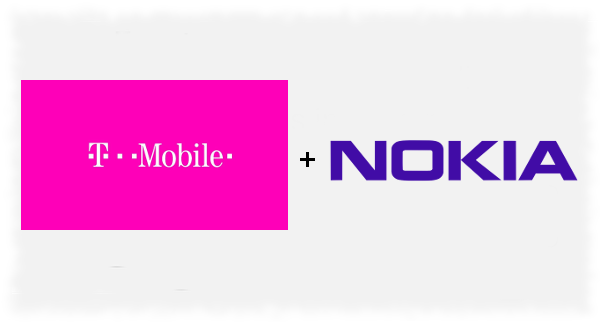 The partners for the biggest 5G deal so far.