Television used to be the bullet-proof way of gathering huge crowds of consumers to share the same experience in real time: whether it was the final game of some favorite sports, yet another talent competition or a highly anticipated episode of Big Brother, people used to plan their life around these fixed events.

And both the advertisers and the broadcasters knew this: the cost of advertising spots for these events were sky-high, as the expected huge numbers of eyeball time were virtually guaranteed.

But apart from sure-fire cases like the NFL Super Bowl, this “ancient wisdom” is beginning to show serious cracks.

The technological advances stepped in first in the form of time shifting: this feature became a household term through TiVo, which allowed the customers to record their favorite programs and watch them when it suits them best.

The plummeting price of local mass storage and the ever-increasing processing power of set-top boxes were the initial catalysts that allowed time shifting in customer devices, but for many triple-play service providers, the current solution is even more intelligent:

It is no longer necessary for each individual customer to record their own copy - instead, all available channels are recorded continuously at the service provider's back end system and the customers are merely given pointers to these files in their “recorders”, so that the one and same recording will be eventually viewed by all of the customers who have tagged it.

Still, from the end-user point of view, the effect is just the same as with the original TiVo device that did the recording locally, and the TiVo model of has been repeated in many satellite-TV receivers, too, as many customers of the satellite-TV providers still don't have a fast-enough Internet-based distribution channel alternative.

Having the time-shift feature built directly into the set-top box is also a big convenience factor.

Hence, whatever is your television programming source today, it is likely to offer some form of time shifting capability. Even many Smart TVs come with a local recording feature: you must only supply the memory card that is needed for storage.

The additional and often much appreciated benefit of time shifting has been the “jump over”-button, which makes it possible to filter away any annoying bits. And with the “annoying bits” go most of the advertising, too.

As a result, the true effect and value of an advertising spot has been thrown into disarray: if your customers have the magic jump button, are the advertisers paying for nothing?

Those networks that rely on advertising have been hit by this trend, but at the same time, it has forced the advertisers to improve their offering to a level that they are not just pushing a product - they provide a mini-story around it.

Hence, the impact of well-targeted and interesting advertising may have become better, despite many jump-overs that occur: those who see the “fancier” ad may be more inclined to be affected by it, whether by actually buying it or by just gaining positive brand awareness.

Internet has taught us to expect on-demand material, which, of course, is simply a modern version of the age-old book approach: the story is there on the shelf until you have the time to access it.

So it is no wonder that as soon as the technology was mature enough, the same, convenient model became the expected behavior for other media consumption as well. And even though Netflix's shares took a nosedive this week due to slower than expected customer growth, there is no question that the streaming video services are here to stay.

And the streaming revolution has really changed the landscape:

Television used to be the main source of entertainment: as I note in my book, in the record year of 2014, the average American spent 4.7 hours watching television, and only in the very recent years the time spent on the Internet has beaten this formerly invincible status of television.

And according to the latest research, the way we watch TV appears to have changed irreversibly towards the on-demand way of media consumption: the report from Hub Entertainment Research shows that the percentage of live TV from the total consumption of television time has dropped from 47% last year to 39% this year, and the first choice for almost half of the customers is now on-demand services.

For the younger population, the change is even more prominent: in the age group of 18-34, only 26% list live TV as their primary choice for television.

And, as discussed in the book, this may lead to the point at which more and more of this extremely valuable frequency spectrum will be made available for wireless communications, for which it suits perfectly:

Spending huge amounts of bandwidth for a handful of television broadcasts is way less useful than dividing that same spectrum into wireless communication channels. So when other means of accessing the same media content become available, those terrestrial television channels that monopolize the airwaves across huge swathes of geographical areas can be divided into gazillion mobile data cells instead, with much more efficient frequency utilization.

This would be yet another technology-induced generational change in the utilization of these invisible waves. 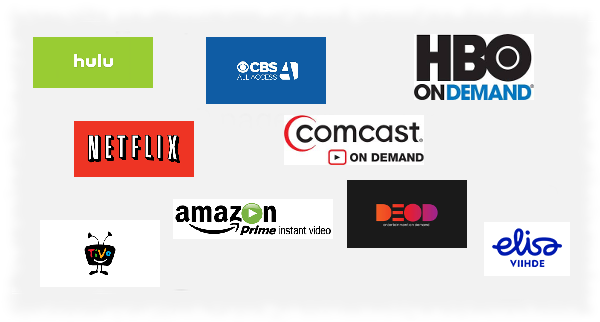 Everyone is offering on-demand streaming media these days