One interesting story that eventually got omitted from the book was the story of the Hollywood actress Hedy Lamarr. In hindsight, I should have included it, so here it is - better late than never.

Hedy, who was born in Austria and who's name was originally Hedwig Kiesler, was one of Hollywood's greatest stars during 1930-1950, and she has been called “The most beautiful woman in the World”.

But Hedy Lamarr was far from being just a pretty face: she was also a prolific and well-connected inventor, who even had a dedicated research space at her house.

Together with the Hollywood composer George Antheil, she patented a frequency hopping scheme, which was intended to be used as a countermeasure against the radio jamming of remote-controlled torpedoes: such jamming was very successfully operated by German submarines during the Second World War.

Even though the U.S. Army did not take the technology in use until 1960s, this invention was the base of spread spectrum technology, which had a major impact in the wireless technology history, both in military and civilian use.

As discussed in the book, spread spectrum was the heart of CDMA and 3G, and is still the core approach of Bluetooth.

The value of this technology is now calculated in billions of dollars, yet Hedy Lamarr and George Antheil were never compensated for their invention.

Hedy also helped Howard Hughes in his quest to build the World's fastest airplane by proposing a swept-wing approach to his airplane designs, and Howard Hughes supported her research activities by arranging a mobile research setup to be added to Lamarr's trailer at movie sets.

I've added a link to a PBS teaser of a recent Hedy Lamarr documentary into the Gallery section. 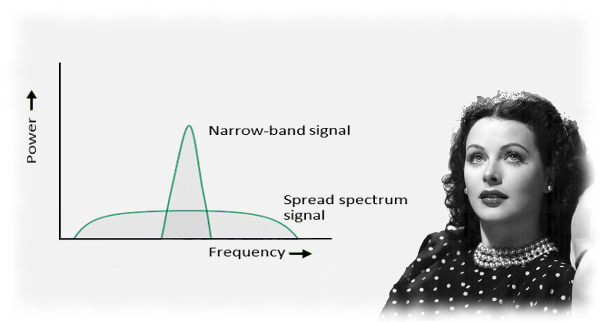