A new release of Devuan, which is a systemd-free Linux distribution, is now out. This should make many sysadmins happy.

Linux, like its “model parent” Unix, was designed to be modular, with applications doing just one thing, but doing it well. This mode of operation was well established over the years, but then somebody thought that bundling formerly separate functionality together into a process called systemd would be a good idea.

The reasoning behind this came from the extended use of Linux for desktop use, where the concept of a dominant single user context was very different from what happens with servers.

Over the years, the dependencies to this new addition grew kind of like the way cancer spreads, and suddenly also the traditional server distro providers started using it.

Unfortunately not much of this made sense in the server environment, only forcing sysadmins with decades of experience to learn new stuff to do the same old things.

As a result, there's been a heated debate on systemd and Linux in the past couple of years. Basically, systemd brings in a monolithic do-all piece of software with dependency tentacles that reach all over the core system. Therefore, from the ground up, the systemd view of the world is very non-Linux, and for many, it changes stuff that wasn't really broken to start with.

Somehow the systemd work seemed to get more resources supporting it than more traditional Linux development, so it is now hard to have a desktop Linux UI without unavoidable systemd dependencies. Therefore pretty much every desktop version had to go along, too.

Personally, especially for Linux server use, I see no reason whatsoever to install a version that has systemd onboard: it forces the admin to re-learn something that has been working for a decade without problems, and introduces new error modes that nobody had seen before. Both these can be argued to be small, depending on your circumstances and luck, but all in all, it just bites into the expertise earned as a long-time sysadmin, and gives very little in return.

Call me old-fashioned, but this is just plain dumb over-engineering, if you ask me.

For a while it looked like going the non-systemd route would require getting into the nitty-gritty of building your Linux distribution from scratch, but luckily there was a budding branch of Debian that has ripped off all systemd code: Devuan.

I did a server installation with an early Devuan, but it did not yet look mature enough for folks that rather just run their systems instead of continuously tweaking them.

But now Devuan has made a new 2.0 release “ASCII”, and the initial feedback from the web is promising. There's even a Raspberry Pi version.

Now if Linux Mint just came out with a Devuan-based version for desktop use, I'd be very pleased to find such a “Mintuan” in the near future. 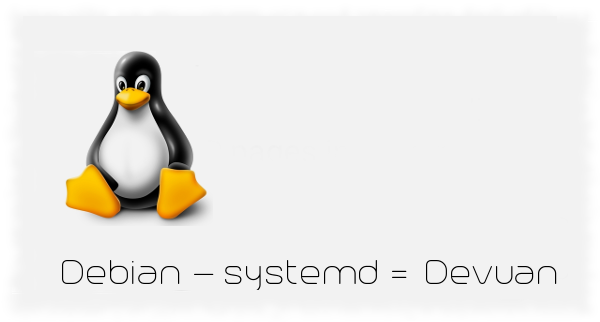