As discussed in the book, Norway is the first country to say adios to the ubiquitous FM radio. All transmissions are now using Digital Audio Broadcasting (DAB) technology, and FM radios are destined to the ever-growing scrap heap of obsolete electronics.

The switch in a country of high standard of living like Norway was originally eased by a strong parallel deployment of DAB services, which led to the fact that quite soon in the process already 70% of the households had a DAB receiver, and the country had 26 DAB channels versus only 5 analog FM channels to choose from. Hence the listeners already saw DAB as a source of station diversity, not just a replacement of the existing analog offering.

The low population of Norway also only supports two program bundles that cover the whole country: the state-driven NRK network that claims 99.5% coverage, and a commercial alternative with 90% coverage, so the network planning has been done from the ground up to cope with the difficult mountainous terrain, and it even includes coverage to the multiple tunnels that reside in Norway.

Yet, the latest indications show that radio audience has declined in Norway as a result of this change, proving once more the old point of view: making complete generational changes with not so obvious tangible benefits is hard.

Naturally, DAB has to compete with the growing streaming services and other Internet-based radio listening experiences that are possible in a country with excellent cellular coverage and no-limit data plans, so this decline can't be blamed solely on DAB. But it is not a good sign for broadcasters in other countries thinking of an identical move.

Last month another long term DAB pioneer, United Kingdom, has for the first time seen the DAB listener share go beyond 50% of the total radio listening audience, and practically all new cars in the UK now have DAB-compatible radios installed. According to the original government plan, 50% threshold was supposed to be THE event that will trigger FM phaseout timetable to be agreed upon.

So is the UK going to take the Norwegian leap now as well?

Not so fast, says the BBC. There are still millions of cars without DAB radios, even the cheapest adapters cost around 50 pounds, and senior population might not be able and willing to follow such a fundamental change. A major loss of the most consistent listener base of radio might follow.

The next few months will indicate what direction the British government is going to take on this. Considering the apparently limitless “treasure trove” of squabbles around the ongoing Brexit, my bet is that nothing is going to happen in the UK any time soon.

Despite having had DAB for over two decades, UK is still lacking in terms of coverage, and as I describe in the book, the UK did other not so good design choices in terms of DAB rollout. The UK also still uses the original DAB standard, not the enhanced DAB+, as what happened in Norway, which does not help in terms of "quality contest" against the good old FM.

Hence, being an early implementer did create another legacy issue, and 50% listener share after such a long time is nothing to write home about.

Another rich country vying for the switchover is Switzerland, but they aim to do this in 2020.

So, for the time being, looks like Norway is going to be in a league of its own.

Globally some 65 million DAB receivers have been sold in Europe, Asia and Australia, and about half of the new sales are in car radios, so the market is growing: 2017 saw a record sale of 12 million units, but compared to the overall receiver population, we are still talking about organic growth, not a hockey stick curve.

As discussed in my book, the ultimate issue from the consumers' point of view is the fact that DAB quality is not so inherently better than stereo FM sound, and in poor and varying reception conditions, like while driving, the dropouts in signal strength can cause much more annoying audio experience than with analog FM, which handles fade-outs much more gracefully and usually with reasonable level of content continuity.

This potential for interference is even worse when an after-market car adapter without an external antenna is being used: good external antenna that comes with inbuilt car radios is always immensely better than anything internal can ever be, so the existing analog FM receiver in the car may appear superior in this sense as well.

And while many car DAB adapters use Bluetooth or direct audio jack as the connection solution, some use a local ultra low-power FM transmitter to relay the received signal to the car audio system: can't really sell a solution like this with a claim of “better than FM audio quality”…

The price and complexity of the required technology for DAB reception remains still quite high, so don't expect DAB to become a feature of smartphones any time soon either.

The expected price erosion is slowed down also by the fact that one of the main markets for consumer electronics, USA, is not planning to deploy DAB. Hence, whatever happens with DAB is driven by the rest of the world only: the DAB market therefore follows the same approach as the current geopolitical climate, and the results are probably just as unpredictable. 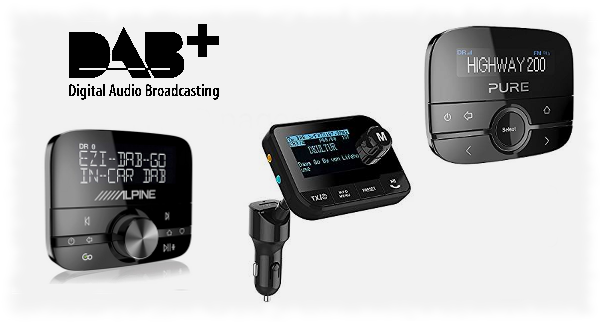 Adapters like these bring old cars to the DAB age, but for a price