It was always going to be just a publicity stunt: what could possibly be proven by a view of the Earth from an altitude of 1.5 kilometers, when there are plenty of easy-to-climb mountains two-to-three times higher than that?

After all, those of us who accept the physical realities of a round planet the size of our Earth have calculated that the curvature of the Earth is not prominently visible until you reach an altitude of 14 kilometers.

“Mad” Mike Hughes was busy basking in controversial publicity by claiming to be a firm believer in the Flat Earth theory. He wanted to witness the flatness with his own eyes by riding a self-built rocket. Mike’s earlier steam-driven rocket had reached a whopping 500 meter altitude, and although he had suffered some serious bruises from the rough parachute-assisted “soft” landing, these injuries did not stop him.

With his newly acquired daredevil fame he had managed to collect enough money from his supporters for a new attempt that would aim at tripling his former altitude. His fame as a “man with a mission” had also already earned him an Amazon Special. This time he was even working for Science Channel’s TV series called “Homemade Astronauts”.

Unfortunately the film crew got more than they bargained for:

The parachute of his formerly untested rocket got ripped off on launch, so he was doomed from the start. The spectators could only witness in horror how the gravity did what the gravity always does: 18 seconds after the launch the rocket slammed nose first into the ground at a free-fall speed that could be calculated to be somewhere between 300 and 400 kilometers per hour.

It would be easy to say that he simply had a death wish and that he finally got what he wanted, but it does not remove the total senselessness of his sacrifice: with the amount of money he spent on his equipment, he could have bought himself a trip on a private jet capable of reaching the 14 kilometer threshold, sipped champagne while taking a peek at the curved horizon, and returned back to the Earth.

Even worse, immediately after his demise, it was revealed that the driver behind the rocket launch wasn’t his belief in the Flat Earth: Mike’s PR representative, Darren Shuster said that "We used flat Earth as a PR stunt. Flat Earth allowed us to get so much publicity that we kept going. I know he didn't believe in flat Earth and it was a schtick.”

Mike’s fake attachment to the Flat Earth nonsense and the fact that a “Science” Channel is glorifying futile attempts that ride on the fake controversy of this “theory” is yet another weird indicator of the ongoing trend of science denial: are we really so detached from reality that we grasp any straws that would “prove” something that we can easily counter-prove by the simple facts right in front of our eyes every day?

Although Mike apparently had faked his dedication to the Flat Earth silliness, it does not remove the fact that his support for it kept on fertilizing this non-scientific movement of wacky claims.

I guess that it will be only a matter of time until some conspiracy theory starts making rounds in the seemingly limitless fringe wackiness of the Internet, claiming that “the global cabal in power sabotaged Mike’s rocket in order to keep the truth away from us all”.

Mike Hughes has my full appreciation regarding his out-of-the-box idea of propelling his flying contraptions with steam, but the way he embedded himself into the non-scientific nonsense turns his efforts solidly into negative territory.

He could just have been a true “Homemade Astronaut”, pushing the limits of human ingenuity and been appreciated as one.

There are causes worth dying for. Mike Hughes’ cause was not one of them. 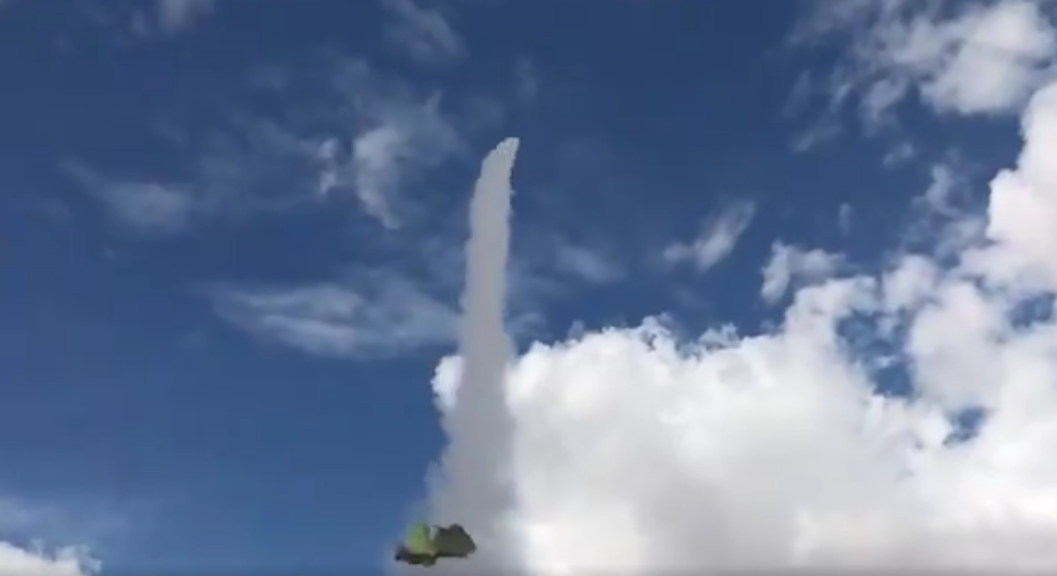 Parachute got ripped off on launch, dooming the mission [@justindchapman]