The constellation of Orion is one of the most easily recognizable ones, and it is well visible right now in the evening sky around the world.

In my book, Flat Out Wrong, I used Orion as a real-life, easily verifiable example on how your point of view of the stars changes as you travel from one hemisphere to the other over a spherical world.

I explain how I traveled from Helsinki to Sao Paulo via London, and how, when Orion was seen from these three locations, it was simply impossible to reconcile the views with the assumed celestial movements as per the Flat Earth “Theory”.

Yet another simple and personally experiment-able proof of the roundness of our home planet.

But Orion has lately been in the news for a totally different reason.

The top left star in that constellation, Betelgeuse, is known to be a monster even in astronomical terms: if it was moved to replace our Sun, its surface would reach almost all the way to the orbit of Jupiter.

Being such a blob of mass also means that the gravity it generates is naturally also on a totally different level, thus accelerating the fusion processes that happen inside of it.

Large stars like Betelgeuse have therefore relatively shorter life spans than “regular” stars like our Sun, and the huge mass that they contain will eventually turn them into supernovas: an explosion so fierce that the star will shine for a couple of weeks with more brightness than the entire galaxy it resides in.

We have witnessed several occurrences of supernovas in distant galaxies and can also find the remnants of such explosions scattered across our own Milky Way. The last visible supernova occurred in 1604.

Betelgeuse is a variable star, meaning that its brightness has been observed to vary over time. But lately it has started to dim more than usual, which might indicate that a supernova explosion is imminent.

Betelgeuse is only about 642 light-years from Earth. This naturally means that we see it as it was actually during 1378 – at a time when the then yet unrecognized Halley’s comet was once more seen in the skies around the world, and if the star has exploded, the photons generated by this occurrence is already on its way to us through the vastness of the Universe.

If Betelgeuse goes supernova, it will likely be brighter than full Moon for a period of several days, and will be therefore easily visible also during daytime. It will cast sharp shadows in the night: a truly spectacular heavenly occurrence for all of us.

Supernovas are also known as the cosmic killers: the moment the star collapses, a huge stream of neutrinos and gamma rays are generated, propagating to all directions. This kind of burst is able to seriously affect any biological life in the vicinity, up to a distance of several tens of light-years.

As a matter of fact, the Earth has experienced several mass-extinctions in its history, many of which are assumed to be caused by a nearby supernova explosions.

Luckily for us, we are far enough from Betelgeuse, so although there will be a noticeable peak in the radiation, it will not have immediate negative consequences. We can safely enjoy the view, although some calculations point at an increase in global warming due to the effects this additional radiation may have on our atmosphere.

But the hyperactive "fake news" anti-Thunberg lot seems to be perfectly capable of expediting local warming even without any help from supernovas, so Betelgeuse would only be the icing of the cake.

The downside here is that the Universe works on a different timescale: Betelgeuse may appear to explode tomorrow, or it may keep on shining for the next 100,000 years. We have no way of knowing until it really goes supernova.

Normal, less impressive novas occur quite often in our own galaxy: I happened to be one of the first to notice a "new" star in the constellation of Cygnus when Nova Cygni blew up in 1975.

Having an unexpected new, visible star pop up in the middle of a familiar constellation was an experience that you will remember throughout your life, even when the magnitude of that nova peaked only at 1.7 – slightly under the brightness of Deneb, which is the brightest star in Cygnus.

Betelgeuse blowing up would be something that everyone would be watching with awe, independent of whether they have formerly learned to spot the constellation of Orion or not. 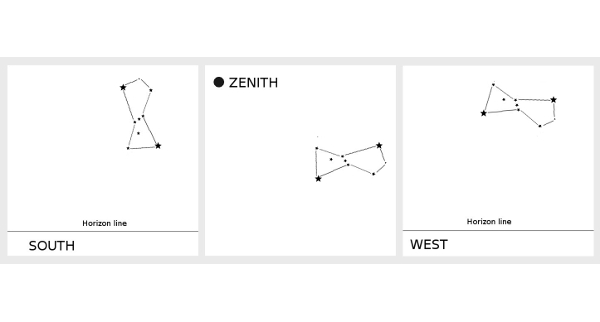 Orion's dance during my flight to Sao Paulo ["Flat Out Wrong"]