Several major tech company missteps have occurred during the past decade, ranging from Nokia’s fall from handset grace to Theranos’ fake blood test bubble, but Boeing’s continuing sad saga over their 737MAX takes the cake in terms of overall costs.

So how did Boeing make the #1 position? In eight simple steps:

1) Respond to competition by creating an updated model of a well-established aviation workhorse that becomes unstable in certain conditions, thanks to the fact that the old airframe can't cope with the newest and most cost-effective jet engine technology.

2) “Fix” this new problem with a computerized system that takes over the controls of the plane and automatically pushes the nose down when it detects such a condition: essentially adding a “shadow pilot” that lurks in the background, supposedly only activating in rare but truly dangerous conditions.

3) Aim at saving in costs and complexity by making this system dependent on a single sensor input only – a sensor which is known to fail at times due to various reasons, ranging from icing to bird strikes, hence making it possible to end up having a false activation in totally safe flight conditions.

4) Not bothering to tell the pilots that such a system exists, or how to switch it off in case of an erroneous operation, as teaching the pilots to use the system would require expensive training and simulation time that would increase the new model acquisition costs for the airlines and potentially drive them to purchase from competition instead.

5) And by offering such an upgrade with the suppressed requirement of further pilot training, originally make the financial goals and cash in royally as the airlines that face constant cut-throat competition rush to purchase hundreds of these new gizmos.

6) But as this “shadow pilot” inevitably malfunctions, two planefuls of passengers and crew get killed, which causes the whole existing fleet of these company best-sellers being grounded. The company tries to continue manufacturing like nothing had happened, but as the non-delivered airplanes fill every empty space at the manufacturing facility, eventually the whole production pipeline must be halted, affecting thousands of workers both at Boeing and its subcontractors.

7) And as a result of the grounding, the livelihood of several airlines is suddenly in jeopardy: they bought the corporate promise of cheaper passenger-per-mile costs and shifted their fleets radically towards the new model, only to see them sitting idle at the world's airports.

8) And so far lose over fifth of the stock value of Boeing - an established and formerly reliable company loved by investors, in a market where everything appears to only go up.

I’ve discussed the various issues of this problem in detail in my earlier blogs, starting from here.

Even the CEO of Boeing has now been ousted as a result of this fiasco. Every possible spare area around Boeing’s construction facilities has been filled with undelivered MAXes, with a list price of 120 million dollars a piece, and you can spot 737MAXes in various liveries parked at the airports where they happened to be at the time of the world-wide grounding of the fleet.

Literally tens of billions of dollars worth of currently unusable high-tech is rotting away, still needing constant maintenance in order to remain in a flyable condition.

As a result of this fiasco, Airbus is again the market leader, and additional stain to Boeing comes from the fact that the year 2019 saw 50% less fatalities in commercial aviation compared to the previous year.

Without the two MAX accidents, commercial aviation would have been astoundingly safe in 2019.

Even if the grounding eventually comes to an end, it is questionable whether the customers are willing to set foot on a 737MAX: the relentless negative publicity around this issue may have a lasting effect on the flying public.

But similar reputation disasters have happened before, and the buying public’s memory is short: for most of us, the key selection parameter for flights is still price.

Hence, if no further accidents will occur in the near future, MAX may still turn out to be the money maker both Boeing and airlines wanted it to be. But for 2019 and most likely also for 2020, the damage has already been done. 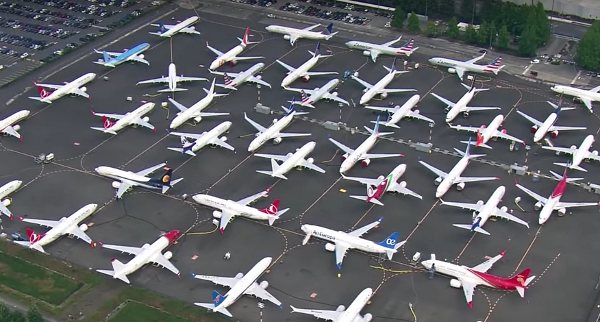