Text sample from the beginning of Chapter 12: "Please identify yourself":

For the next six months, the worried owners distributed posters and flyers, promising a 500-dollar reward for any information that would lead to George’s recovery. They also repeatedly contacted all animal shelters in the neighborhood, but George seemed to have vanished without a trace.

Years went by, and they gave up on the search.

But thirteen years later the owners got a call from Sonoma County Animal Care and Control, stating that the shelter had picked up a stray cat that appeared to be George.

George was now seventeen years old, which is a lot for a cat, and in pretty bad shape, suffering from toxoplasmosis and respiratory infection. He also had a serious case of malnutrition, weighing less than three kilograms at the time he was found—about half the weight of a healthy cat.

George had clearly been busy going through his nine available cat lives in the past thirteen years, and even his last life was now hanging on a thread: in normal circumstances, if a shelter finds an animal in such a bad shape, the chances of finding a new adoptive home are very slim. For a cat in George’s condition, the next step would likely have been euthanasia.

What saved George was the fact that under the loose skin around his neck was a tiny, rice grain-sized Radio Frequency Identification (RFID) chip, containing a serial number that could be remotely read by a simple hand scanner, and the number in George’s neck brought up the contact info of its owners from the national animal database.

As is the standard at any animal shelter, the first step at Sonoma County was to check if the newly found animal had been “chipped”. This is simply done by hovering a wireless reader around the animal's neck, which is the usual location for the embedded RFID chip. George’s owners had had enough foresight to get their veterinarian to install the chip, and thanks to this simple procedure, done almost two decades earlier, the cat was finally reunited with its owners.

According to estimates, 5–7 million stray pets ended up in various animal shelters in 2016 in the United States alone, and just 20% of them were chipped, so there’s still a long way to go before all runaway pets can have the same happy ending as George.

The need to be able to remotely identify objects dates all the way back to the first half of the 20th century: Radio Detecting and Ranging (radar) was invented in the early 1930s, and research around this novel way of remote sensing happened simultaneously in the United States, Great Britain, France, Germany, the Netherlands, the Soviet Union, Italy and Japan.

Radar was first widely used as a key tool to support the Battle of Britain: in 1940, the British coastline was sprinkled with antenna systems called the Chain Home Network, designed to give the Royal Air Force (RAF) the early warning it desperately needed in trying to make this an even fight—the German Luftwaffe had four times as many planes as the RAF, so the RAF was looking for any possible means to gain extra advantage under the threat of imminent invasion of the British Isles.

The information gathered by the Chain Home Network proved crucial in balancing the situation: by being able to deploy just the right number of fighters to just the right intercept locations, the RAF started evening the odds: for every lost British fighter plane, two German planes were downed.

As Germany could not ensure air superiority over the English Channel during 1940, their hope for an early invasion faded. Fortuitously for the British, the Germans did not know that despite the 2:1 downing ratio, the RAF was still losing planes at an alarming rate and would have eventually failed.

But the situation suddenly changed due to the poor strategy choices made by Adolf Hitler: when the first British bombing raids over German territory caused a moral hit amongst the German population despite their relatively minor effectiveness, Hitler ordered Luftwaffe to attack primarily with bombing raids against London. This left the radar installations and airfields out of the target list, giving just the kind of breathing space the RAF needed in order to start a slow recovery.

Although the Chain Home Network was the most powerful example of the usefulness of radar, the technology itself was known to all warring parties: Germany had their own, quite successful and technologically more advanced Freya radar system, which showed its power for the first time in December 1939 by detecting a fleet of 22 RAF bombers on their way to Wilhelmshaven. Although the planes managed to finish their bombing run before the German fighters caught up with them, only half of the bombers returned back to England without any damage, whilst just three German fighters were shot down. The accuracy needed for intercepting the returning bombers was provided by the Freya system.

To speed up the development of the next generation microwave radar, based on the newly developed magnetron, the British decided to team up with their American counterparts, taking their most closely held secrets to a new, joint lab at the Massachusetts Institute of Technology (MIT) in Cambridge. This exceptional sharing of military technology happened one year before the United States even entered the Second World War.

Radar is based on short radio pulses that are sent out in a highly directional beam, and then listening to any reflections of these pulses caused by objects in that particular direction. Even though the radio waves travel at the speed of light, the extremely brief time that it takes for the reflection to bounce back can be measured and used to calculate the distance to the object, whereas the current angle of the rotating antenna indicates its direction.

Radar is especially well suited for detecting objects in the air or at sea, and some special applications even work on land: several major airports utilize Surface Movement Radar systems that add to airport safety by providing ground controllers with real-time situational awareness regarding the movements of airplanes along the taxiways.

During the Second World War, radar had proven to be very useful in providing an early warning system of approaching airplanes, but it had one major problem: with so many planes in the air in a dynamically changing, often chaotic combat situation, how could either side tell whether the planes detected were the enemy approaching or their own planes returning from a mission?

German pilots and radar engineers noticed that if the pilots rolled their planes on their way back, the radar signature changed ever so slightly, giving the ground crew a potential indication that the approaching planes were friendly ones. The British took this approach further, installing special transponders to their planes that reacted to the incoming radar pulse, transmitting back a short burst on the same frequency. As a result, a stronger than normal return signal was received at the radar station, which in turn caused an easily distinguishable indication on radar screens.

The functionality of radar is the basic principle of remote interrogation, and identical, although more sophisticated active transponder systems are now the norm in all commercial and military airplanes.

Primary radar matches the functional description above, giving the distance and direction of an object, but it lacks precise information of the altitude, and has no way of actually identifying the target.

Secondary radar sends a special interrogation pulse, and transponders on the planes reply with a short transmission that contains the plane’s identification and altitude data.

Easily identifiable rotating antennas for radar can be seen at most airports, and in a very common configuration, they have a flat, rectangular secondary radar antenna stacked on top of the larger primary radar antenna.

By joining the data from both primary and secondary radar systems, the Air Traffic Control (ATC) can have a complete picture of exactly who is on what altitude. Computers then keep track of the relative speeds and altitudes of all detected planes, providing automated collision warnings to the controller in case two planes get too close to each other.

Most major airports have a mandatory requirement for airplanes to have their transponders active in the airspace surrounding the airport, and in practice, there should be no legal reason ever to turn off the transponder while in flight.

This is particularly important due to the fact that commercial planes are equipped with a Traffic Collision Avoidance System (TCAS), which sends its own interrogation signal that is similar to the one created by the secondary radar system, and then listens to the replies coming back from the transponders of nearby planes. In case the calculated trajectory of another plane appears to be on a collision course, TCAS automatically instructs pilots on both planes to take optimal avoidance maneuvers.

This is yet another example of how radio waves can be harnessed to provide unparalleled safety in complex, constantly varying situations.

And when these systems fail, the results can be catastrophic:

In the afternoon of September 29th, 2006, flight 1907 of GOL Transportes Aéreos with 154 passengers and crew took off from Manaus airport for a short three-hour flight to the capital of Brazil, Brasília. For the GOL crew, this was yet another routine southward flight on board a three-week old Boeing 737-800 plane, following a familiar route that at all times has only a small amount of traffic.

A couple of hours earlier, a brand-new Embraer Legacy business jet had taken off on its delivery flight for an American customer from São José dos Campos airport, the home base of the manufacturer, Embraer S.A.

Legacy was heading north, towards its first refueling stop at Manaus, on a flight plan that expected it to fly over the Brasília VOR station along the route.

VOR stations were discussed in Chapter 6: Highways in the Sky.

Less than two hours into the flight of the Boeing, while flying at 37,000 feet over the jungle of Mato Grosso state, the incoming Legacy jet’s winglet hit the middle of the left wing of the GOL flight, slicing off half of the wing. As a result, the Boeing entered an uncontrollable dive, rapidly followed by an in-flight breakup and eventual high-velocity crash into a dense area of the rainforest below.

There were no survivors.

Legacy also had serious damage to its wingtip and horizontal stabilizer, but it managed to do an emergency landing to a nearby Brazilian Air Force airbase, with all five occupants unharmed.

How could two brand-new aircraft, both equipped with the very latest TCAS systems, flying in controlled airspace with very light traffic load, manage to collide? 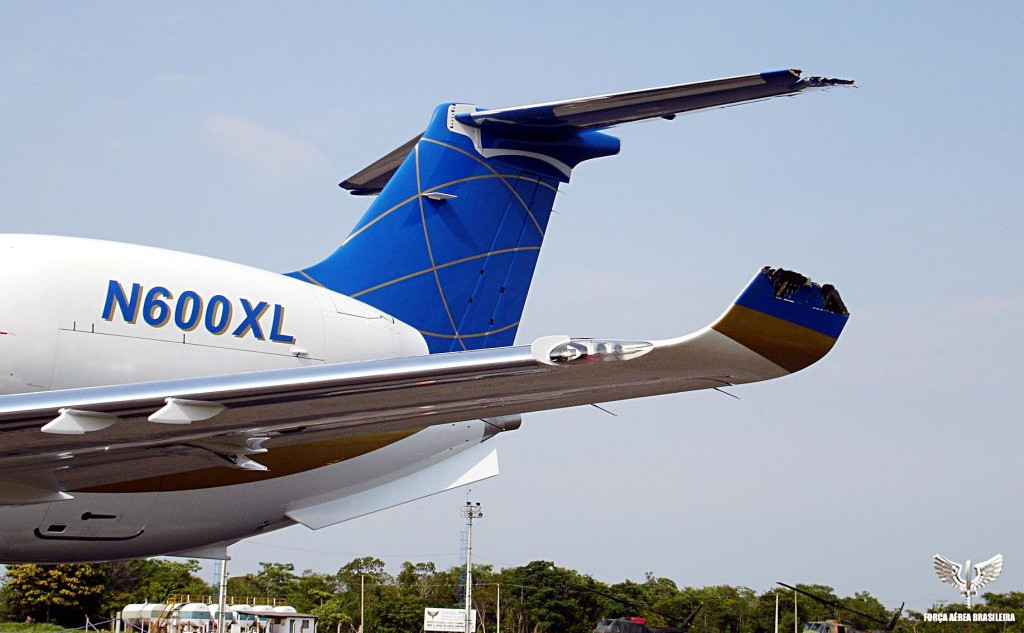