Remember pagers? Those pocketable thingies that were used to send you short text messages? They were the first to go the way of the Dodos when SMS was introduced.

SMS quickly became a world-wide success, with true world-wide coverage: the cross-operator functionality worked well enough that SMS could be used as a reliable means of even international communications, and the possibility of receiving delivery reports helped in increasing the trust towards this service.

The initial 160-character limit was made transparent by automatic chaining of subsequent messages into one, and the highest-ever per byte data transmission cost of SMS services offered a way to the operators to print money.

There were those occasional glitches in delivery management that led to 17 repeated messages while traveling (why it was almost always 17 is beyond my understanding), but the system did what it promised to do: deliver messages in seconds even to the other side of the world.

Then the world started expecting more complex messaging modes and the telecoms world tried to follow up with Multimedia Messaging Service (MMS). It turned out to be a horrendous flop that lacked pretty much everything that the SMS users took for granted. So no wonder that it failed miserably.

And as I wrote in my book, WhatsApp has since stepped in and filled the gap: you have now an operator-independent service that has taken over, works globally and offers a unified multimedia experience.

And the operators have seen their former cash cow evaporate.

The operators lost a major control point and appeared to have completely missed the boat here, but they are not yet entirely out of the picture:

A new service called Rich Communication Services (RCS) is being heavily promoted by the operators in collaboration with Google (via Android). Basically the idea is to reinvent WhatsApp and try to wrestle the rich media communications back, leveraging the huge coverage of the Android platform.

This would bring back the control point to the hands of the operators, including the means of wiretapping into the traffic.

The new service on top of this is simply called Chat, and it has the support of 50+ of the largest operators and 10+ OEMs. But unlike WhatsApp, which is a pure data service on top of the Wireless Internet, RCS still requires changes in the operators’ platforms in order to connect it to the relevant back end processing and billing.

The rollout has been anything but rapid: the RCS standard was ready to be taken into use already in 2008 and is promoted by the GSM Association (see the huffing and puffing at the GSMA RCS site), so there is no lack of backing for this. But the necessary support for the RCS is only now creeping into some of the operators’ platforms. In the US, Verizon, AT&T, Sprint and T-Mobile intend to replace SMS with RCS in 2020.

In reality, WhatsApp is going to lose the billions of cross-compatible users in this game only if Facebook does something incredibly stupid that forces the WhatsApp crowd to either integrate with their base platform or start accepting advertisements. But we have seen how Facebook is capable of doing incredibly stupid things, the consequences of which even alter the political landscape of the world, so let’s not count out RCS yet.

After all, operators would love to gain back the control point they lost due to the MMS fiasco, making the users to shovel billions of dollars to them again, as predicted in the attached GSMA summary for 2021 (good luck with that). And the governments that want to tap into your messaging traffic are certainly giving their nod on the RCS, too.

Although the Djinni appears to be out of the bottle, this is not necessarily a game where the best one wins. 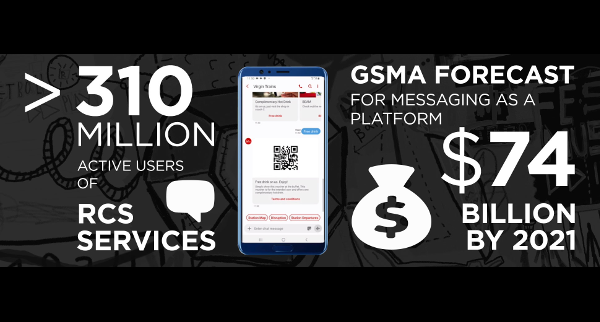