Let’s lay down the facts:

Mercury and Venus orbit the Sun closer than our observation point, the Earth. And as the orbits of the planets in our Solar System are almost completely aligned on the same plane, it is inevitable that sometimes the inner planets will end up exactly between the Earth and the Sun.

As a result, the inner planets appear to wander across the visible disc of the Sun.

These events are called transits, and I discuss the physics, regularity and easily observable implications of them in my book, Flat Out Wrong.

This Monday, another such transit happened, with Mercury ending up precisely between the Earth and the Sun.

As our heliocentric model has proven to be very accurate, we can calculate when these transits happen. We can project the path that these inner planets will take when they “fly” across the Sun’s disc. And we can predict the locations on Earth where these events will be visible, and their starting and ending moments down to a second's precision.

And this prediction capability is not happening only due to advances in modern science: we have been able to do similar predictions for centuries.

For example when Captain James Cook was on his first voyage around the World, he had several scientists on board, commissioned by the Royal Society of London.

Why put a bunch of scientist on such an arduous journey, risking their lives and exposing them to the harsh conditions of ocean crossing for months?

Because already in the mid-18th century, it was known that the transit of Venus would happen on June 3rd, 1769, and in order to be able to calculate the distance of the Sun better, the scientists of the era wanted to take advantage of the parallax phenomenon and observe this transit from a different vantage point: the island of Tahiti.

As a result, the average distance of the Sun was calculated down to a precision that was only off by 0.8% as compared to today’s radar-based observations.

All these calculations are based on the fact that our heliocentric model has been proven to be the most accurate rendition of the reality around us. The Sun sits at the center, with all of the planets, including the Earth, orbiting around it, held in their orbits by the gravitational forces induced by the mass of the objects.

With this model, repeating occurrences like transits and eclipses can be predicted over and over again, with amazing precision and without fail.

As a comparison, if the Sun is hovering over a Flat Earth at the altitude of just 5,000 km, what are these occasional black, round dots that cross its visible disc, like happened again this week? And what are the calculations that can be used to predict them?

Despite their claims of “indisputable proof” of their world view, we hear only crickets from the Flat Earthers when we ask them to explain simple events like the transit on Monday.

Yet this absurdity seems to be gathering pace: recently Brazil witnessed its first Flat Earth Conference. The local “priest” has almost 30,000 followers and appears to have direct communication path to the current president, who hasn’t exactly shown much respect on science with his actions lately. According to a recent study, up to 7% of Brazilians appear to believe that the Earth is flat.

Does not bode well to the scientific future of my former home country that I learned to love during my 15 years of living there.

You can read more of this sad state of affairs down south in this article by the Guardian newspaper.

As I wrote in my recent essay in UpJourney, the Internet has become the breeding ground of pointless conspiracy theories, and the seemingly legit access to this kind of nonsense appears to pull more and more gullible readers into the bowels of what in the end is a money-extraction scheme, cooked up by a bunch of charlatans.

Gullibility is not a sin, but the saddest part of this all is that the results of centuries of hard science is used against itself by using the Internet for spreading such nonsense.

And the Flat Earthers are not the only ones: I predict that the incoming 2020 Presidential Race in the US will be the dirtiest in terms of phony information spread, not helped by the lax approach to the content of their sites by channels like Facebook and Twitter.

If you use Facebook as your source of "news", let that number sink in...

Despite this major cull, Facebook still allows knowingly false content to be used as part of the election campaigns.

We should prepare ourselves to be critical and weigh the reliability of all sources of such information: as has been proven time and again, those shouting “FAKE NEWS” the loudest are indisputably proven to be the sources of the greatest amount of lies themselves. 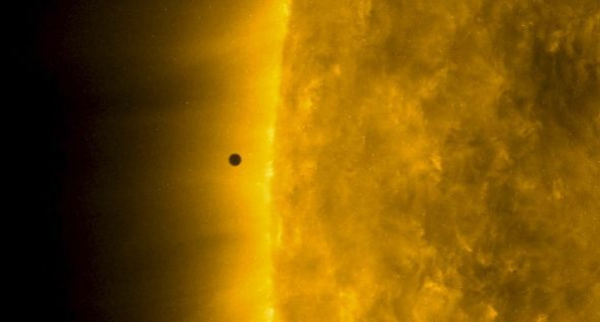 Mercury approaching the visible disc of the Sun [NASA]