In my earlier blog entry, I wrote about the dramatic reduction of orbital injection costs brought in by the reusability of SpaceX’s rockets. NASA’s Space Launch System (SLS) was projecting a cost of almost billion dollars per launch, which did not compare well with SpaceX’s Falcon Heavy, that has a list price of 90 million per launch, for about 50% of the capacity provided by SLS.

With those numbers, we were not talking about common sense: continuing with the SLS program was simply about providing cushy government jobs across the USA.

Therefore I predicted that the days of SLS were numbered, but I clearly underestimated the inertia of this “government pork”, provided by the NASA money. Apparently the money for ten launches has been approved.

Hence you could buy 20 Falcon Heavy missions, haul 10x more material to space, and still be left with 200 million of pocket money each time you scrapped an SLS launch.

What is even worse, SpaceX is getting ready for a yet another quantum leap in capacity with their rapidly progressing Starship program: OK, the Starship prototype failed an upper-stage pressurization test just yesterday, but big bangs seem to be part of the SpaceX's development history, and appear to lead to corrections in due time.

As a comparison, the SLS still lives in CGI only.

Falcon Heavy is available today. Starship may be available in two years: around the same time as the first predicted launch of SLS, that is already years behind schedule. But even if Elon Musk's promises over Starship turn out to be too forward-looking, the SLS looks ridiculous in comparison with existing competition.

Other launch companies have seen the writing on the wall: ArianeSpace is also now actively pushing reusable technology, and even the mini-rocket launch company Rocket Lab is planning a helicopter-based recovery model.

So instead of ensuring a convincing lead in reusable rocketry for SpaceX and USA in general, NASA's hesitation to accept reality may give time for the rest of the world to catch up.

Meanwhile, SpaceX just launched and recovered the same booster rocket for the fourth time, solidly proving the feasibility of their reusability model. Those in the know inside NASA who just want to advance the space exploration mandate of NASA can't be happy over the continuation of the SLS program.

With the SLS project we are witnessing the last gasps of an obsolete technology. 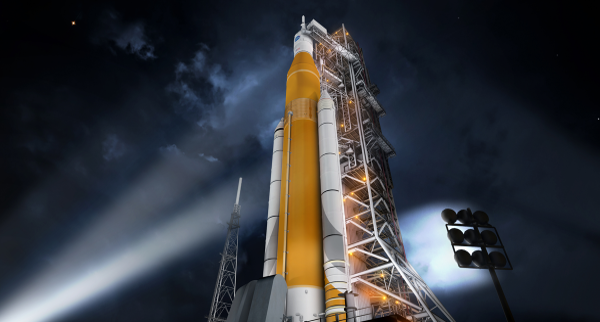 The SLS is still ready for launch in CGI only [NASA]