In July 2010, I had the first inspiration about writing a book about wireless technology, with main focus on the connectivity explosion provided by the cellular networks.

I dabbled with the idea under the working title "The Hockey Stick Book", up to the point that I had a skeleton of what eventually became Chapter Two and parts of Chapter Three in the current book.

Then something more interesting apparently came up (don't quite remember what), and the project gathered dust for about five years.

Cue to May 2015: as the deal that transferred the handset division from Nokia to Microsoft was going south from Microsoft's point of view, INDT, my then employer, was facing the loss of their major source of income and had to adapt to the new, harsh economical reality, right in the midst of an economical downturn in Brazil. After ten years on the job, I was an expensive "internationally experienced managerial item" for a company that simply had to switch from an international player to a domestic one, and the kind of skills I had did not match well the new challenges ahead. I had no problem in understanding the financial reasoning behind letting me go. That was fine, and I wanted to do whatever was needed to help the employer that I appreciated very much.

Two months later I was energized by my first break in about 30 years of non-stop working: I dug out the early manuscript, thought of a better name, and built a skeleton Table of Contents.

Then I took the habit of getting into a hammock at my balcony in Manaus after sunset and just beefing up the story, page by page. "At least three times a week", I promised to myself. Just a page or two or another read through with corrections, or when the rain forest air of Manaus was unusually cool, even more.

It was a simple game of setting aside the time to do this while enjoying the lightning flashes from nearby tropical thunderstorms. If I did it at least twice a week, I was happy with myself, but it turned out to be the activity for almost every evening when it was not pouring down in Manaus ;)

In late May of 2017, almost two years later, I felt that I had a consistent story in my hands, and started pitching it around. First to a handful of selected literary agents, which really did not lead anywhere. So after two months of fruitless pitching plus a brief late-summer break in Finland, I changed tactics, searched for potential science-oriented publishers, and selected eight of them for a direct push.

To my surprise, three of them gave a positive response in a very short time, two of which I thought worth progressing with.

I was most excited by the reply from Springer: this was an established publisher, and I had read many of their books during my career. I knew that they were of the utmost quality in publishing, and the fact that they liked my work was also a confirmation of the quality of my writing.

Another prominent offer came from a publisher that specialized in eBooks, with somewhat better terms, as might be expected from a smaller player with minimum cost structure.

All in all, I spent some agonizing days exchanging messages back and forth with the contacts in these two companies, but in the end, Springer's history and their undoubtedly global reach won.

I signed the contract and spent a couple of weeks in finalizing the chapters, handing the final manuscript to Springer in December of 2016.

I have to note that I got very good feedback and guidance from the owner of the other company, too. Maybe I'll find a story to write that suits them better in the future.

And today, 15th of March 2018, two years and eight months after the reboot of the project, the book made its appearance for pre-sale on both the Springer website (see the picture) as well as at major booksellers, with the projected publication date for the paperback edition on 19th of June, 2018.

Although the content is now only pending the typesetting round, the cover is not. Yet the book is already in pre-sale. That's the effectiveness of a major publishing company.

And it feels good to get something as big as this finalized. There's always those little things that could have been done differently, a sentence of two that you never seem to be totally happy with, and most of all, the world is changing around us in relation to the latest developments. But books are always frozen in time, reflecting the moment they are published. So the very, very last bits will always feel incomplete, as something new is coming out all the time.

Writing a book is a huge task, especially when you need to check and double-check the details. It's obvious that some errors may have slipped in, and I will report any on this blog page.

There are days when you feel that you are stuck or totally fed up by the umpteenth read through, and other days when you write ten pages and find just a typo or two in it later on.

But at this point, it feels like a time well spent. I learned a lot along the way: the biggest eye-opener was the Battle of Tsushima Strait and how that affected the world. Hence it made the first chapter in the end. I think that is the least known consequence of these invisible waves, and it is one heck of a story.

I hope you readers will find this little bundle of wireless technology-related stories interesting as well. Here is a sample from the beginning of Chapter 12. 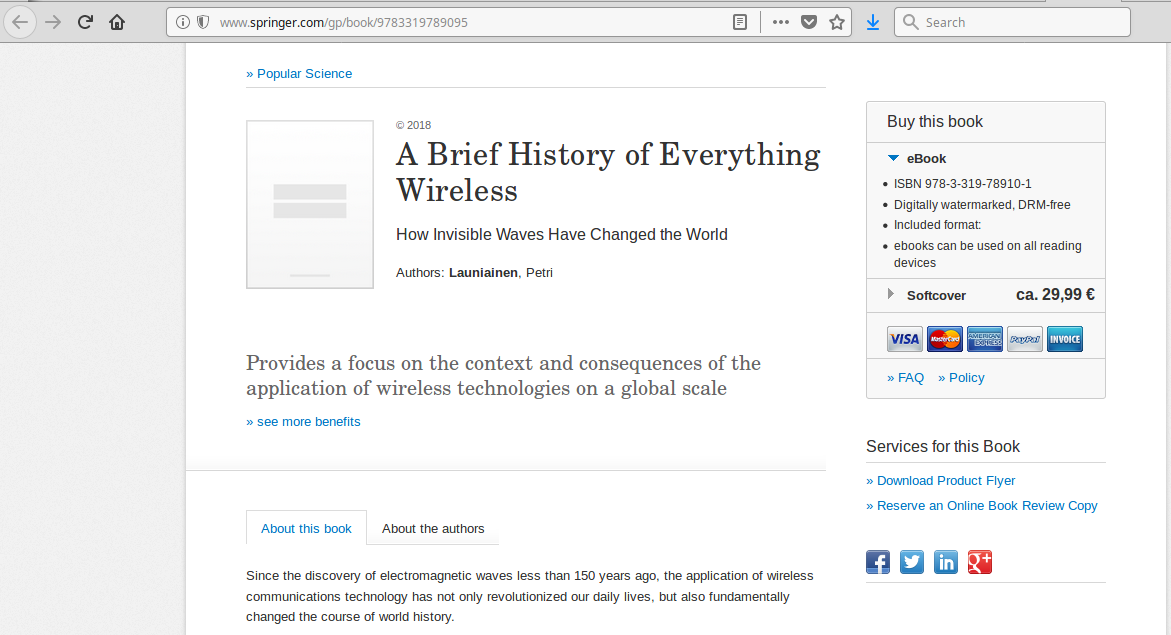