My book contains several examples on how radio amateurs have been at the leading edge of wireless technology ever since the early days. Communications from space are not an exception: while the astronauts were taking their first steps on the Moon in 1969, Larry Baysinger, call sign W4EJA, was eavesdropping the lunar transmissions directly as they were happening.

With his home-made steerable directional antenna, Baysinger was only able to listen to the “local” VHF traffic between the astronauts - the required microwave technology to tap into the Moon-Earth communications was still relatively expensive for hobbyist uses. But being able to receive low-power signals from a distance of 400,000 km was no small feat, whatever the frequency band.

The space community has always been quite open to radio amateur activities: several OSCAR relay satellites are orbiting the Earth, and both astronauts and cosmonauts on the ISS frequently embark on “ham radio” communications with random counterparts around the world.

Similarly, many hobbyists have been able to demonstrate the reception of the images that weather satellites are constantly streaming down from the orbit.

And it is possible to reach even further away: last month, a Canadian radio astronomer, Scott Tilley, VE7TIL, announced that he has been able to listen the Chinese Tianwen-1 probe transmissions from Mars. Prior to this he had also been able to receive signals from the Mars Reconnaissance Orbiter.

The very latest success in this area was revealed when several hobbyists on Reddit discussion boards announced that they had been able to tap into the telemetry data from SpaceX’s Falcon 9 rocket, including the streaming video that is shown during the official SpaceX live feeds during the launches.

There’s no real reason for this data to be encrypted, so working out the contents of the transmissions is not a major breakthrough. The real trick is in being able to catch these signals in the first place:

First of all, a Falcon 9 second stage is a rapidly moving target somewhere in the 150-200 km altitude. You have to be able to point a highly directional microwave antenna to the exact location in order to grab the signal.

Secondly, these transmissions are in the 2.2 GHz range, and the required Software Defined Radio equipment usually does not work yet on such high frequencies – only one product, HackRF One, is able to accomplish this, costing over $300.

But an age-old trick, the super-heterodyne conversion, which is discussed in detail in my book, can be utilized to down-convert the initial signal to a lower band of a couple of hundred MHz. This enables the use of a sub $100 AirSpy Mini SDR hardware, or even the infamous RTL-SDR dongle that costs only about $25.

The latter is actually sold as a Terrestrial Digital Video Broadcast (DVB-T) receiver, but a bunch of radio amateurs found a way to tap into the internal data stream and thus turned it into an inexpensive and flexible SDR receiver unit.

All this once more proves that whatever you transmit is basically available to anyone with enough drive to tackle the technical hurdles, and if you want to keep your wireless data secret, you have to encrypt it.

It is highly unlikely that SpaceX would bother to go and encrypt their downlink data even after the recent revelations: most of the useful telemetry and video is broadcast live during the launches anyway. The only previously unseen feature that was found as a result of this effort was the fact that the on-board camera flips between not only the formerly familiar rocket engine and satellite deployment views, but also temporarily shows a view from a camera pointing at the liquid oxygen tank onboard.

More information on such “spacetapping” projects can be found at www.r00t.cz, and info on the current flagship of open-source SDR, HackRF One, can be found from the aptly named manufacturer, Great Scott Gadgets. 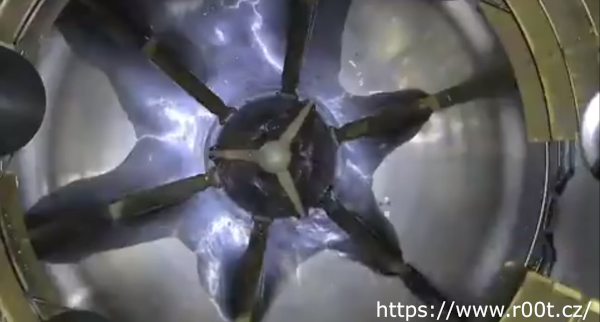