While I was researching for my first book, I unintentionally stumbled across this growing fad of a flat Earth. To my surprise, folks were even having international conferences over this issue, where they discussed this newly-found form, apparently with a straight face.

As a pilot with instrument rating, I have had plenty of personal experience in both theory and practice of navigating on our planet, and there is no doubt in my mind that we live on a globe.

I have also had keen interest in astronomy and space exploration since I was a kid, so by simply observing the changes in the skies during my trips around the world has introduced me to the visual effects resulting in from moving around on a giant ball.

But the Earth is huge and the first impression is flatness, so it is easy to offer material that looks superficially true, and some people on the Internet are doing just that: releasing one slick video after another, in order to benefit financially from the audience that seems to be more and more hostile against "scientifically proven" things every day.

Therefore, while I was waiting for the typesetting process of my first book to complete, I started collecting all those tiny clues around us that unequivocally point at the roundness of our planet.

The result is this book, "Flat Out Wrong: The Overwhelming Evidence Against Flat Earth", in which I put hard mathematics and science aside, and present a set of easy, personal observations that anyone can make in order to figure out the true shape of our planet.

The storyline puts the Flat Earth Model against the Globe Earth Model, case by case, and is supported by 50 images and illustrations.

Even if you had no doubt over the shape of our home, there are plenty of little things that you most likely had never thought of, even though they were occurring around you every day.

"Flat Out Wrong: The Overwhelming Evidence Against Flat Earth" is not just a story of the form of our planet, but also an entertaining summary of the shape of our Universe, peppered with my personal observations around the world.

It also addresses the fundamental question: why this kind of "woodoo science" is such a growing phenomenon in our world today.

The book is available on every Amazon store around the world, and the supporting website is live at flatoutwrong.com 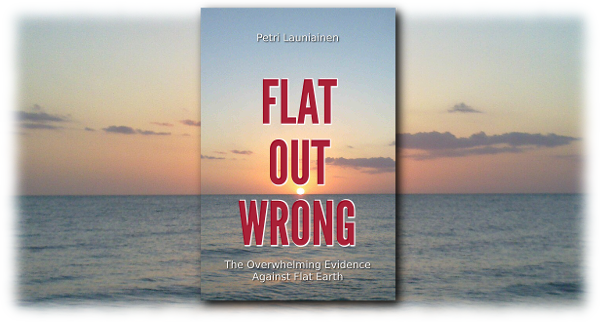 An entertaining intro to our planet and the Universe